Chelsea make the short trip across London to take on West Ham at Upton Park on Saturday. Here’s the starting eleven Jose Mourinho could go with for the game.

Chelsea make the short trip across London to take on West Ham at Upton Park on Saturday evening.

The Blues head into the game sitting fourth in the Premier League table, four points behind leaders Arsenal, so will be hoping to close the gap this weekend.

Jose Mourinho appears to have picked up no fresh injury concerns following the international break, but we should know more when the Portuguese coach holds his pre-match press conference on Friday afternoon.

The club confirmed on Thursday that striker Fernando Torres is back in training after recovering from a muscle injury, so he has a good chance of being in contention to face the Hammers. If the Spaniard is ruled out, Samuel Eto’o is expected to start up front.

Ashley Cole aggravated a rib injury while playing for England against Germany on Tuesday so will miss the weekends action. Cesar Azpilicueta is in-line to fill in at left-back.

Gary Cahill looks favourite to keep his place alongside John Terry at the back while Frank Lampard should partner Ramires in midfield. Juan Mata is battling with Andre Schurrle for a place in attack but the German could get the nod as he has done in recent games.

Here’s the starting eleven Jose Mourinho could go with for the game: 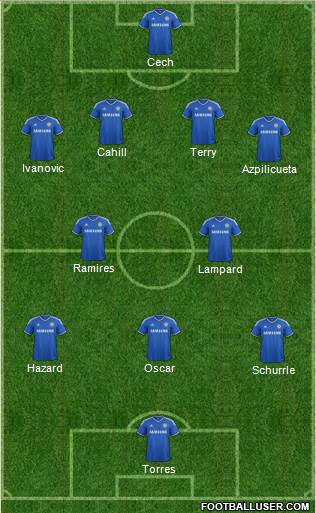