Arsenal are set to welcome high-flying Southampton to the Emirates on Saturday afternoon. Here, blogger Gooner Daily gives us the team news and line-ups.

Despite the narrow loss 1-0 to Manchester United before the international break, Arsenal remain two points clear at the top with Liverpool and surprisingly, today’s opponents, Southampton, breathing down the Gunners’ necks. This fixture presents the Gunners with the perfect opportunity to consolidate their position at the top of the table and a victory will go a long way in restoring confidence back to the team.

Mauricio Pochettino has done a marvelous job at the Saints, particularly as the team struggled badly in the Premier League under Nigel Adkins after he had secured back to back promotions from the lower divisions in English football. Pochettino was a no-nonsense defender in his playing days and he has adapted a strong defensive approach on his team.

Following Arsenal’s defeat at Old Trafford, Southampton are currently the most in-form team in the Premier League and in their last six games, they have won three (Swansea, Fulham and Hull), drawn two (Stoke and Manchester United) and one defeat (Sunderland). They have also faced fewer shots on target than any other side in the Premier League this season (31).

Pochettino’s starting lineup doesn’t have so many household names, but as a unit, they have become a force to be reckoned with this season. Artur Boruc was released from AC Fiorentina and found a new lease of life on the south coast. This season, he has produced outstanding performances on a weekly basis. His defense also do their bit as Jose Fonte and Dejan Lovren have become a formidable defensive pairing while the energetic youngsters, Luke Shaw and Nathaniel Clyne, bomb forward to support the attack.

In midfield, the signing of Victor Wanyama from Celtic was a stroke of genius by Pochettino as the Kenyan enforcer alongside French sensation, Morgan Schneiderlein, are responsible for closing down opposition players further up the pitch, a tactic that has worked wonders for the saints this season. In attack, Adam Lallana has massively improved and he recently earned his first England cap in the loss to Germany. James Ward-Prowse, Jay Rodriguez and Rickie Lambert (he has been involved in seven goals thus far) have also contributed to the team’s cause this season.

Southampton now have the longest unbeaten run in the Premier League (eight games) but they were whooped convincing (6 – 1) by the Gunners last season and Arsenal are unbeaten in their last 18 league home games against the Saints. Arsenal have not lost a home league game against Southampton since November 1987, winning 13 and drawing five of their 18 matches since. Southampton’s win ratio against Arsenal in the Premier League (14 percent) is the lowest of any side they’ve played more than three times in the competition.

Arsene Wenger is able to call upon the services of Jack Wilshere and Theo Walcott – however I think the winger will start on the bench and be introduced if needed. Aaron Ramsey will also return to full fitness as he missed Wales’ fixture last week. Per Mertesacker has recovered from the virus that struck him before the Manchester United game but Tomas Rosicky faces a late fitness test.

For the visitors, Jack Cork will miss Southampton’s trip to the capital due to an ankle injury. He twisted his ankle badly, although it is unclear how much longer he faces out. Guly do Prado is also absent after undergoing a knee operation, while Gaston Ramirez’s fitness will be checked after arriving back from international duty with Uruguay on Friday lunchtime. Dani Osvaldo is expected to be fit despite suffering an allergic reaction on international duty.

Wojciech Szczesny would want to mark his new deal with a clean sheet and he’ll also be mindful of the game as it was his howler against the Saints that ended the Gunners’ impregnable clean sheet record at the start of last season. Even if Laurent Koscielny cocked up for France last weekend, I’d expect him to play alongside the Big F*cking German, Per Mertesacker, relegating skipper, Thomas Vermaelen, to the bench. Kieran Gibbs had a cameo against Germany while Bacary Sagna had a handful of minutes in the match against Ukraine so they’ll be fresh for the encounter.

In midfield, I’d expect a better performance from that poor showing at Old Trafford. Mathieu Flamini the Flanimal will be suspended for this game after picking up five bookings and he’s odds on to be replaced in the middle by the red-hot Aaron Ramsey, who has netted 11 times in 18 competitive appearances for Arsenal this season, this after scoring 11 in his previous 150 competitive appearances for the club before this campaign.

The Gunners will also line-up with Ozil, Cazorla and Giroud in attack and they have to step up the plate today as all three put up lethargic performances at Old Trafford.

My expected lineups would be: 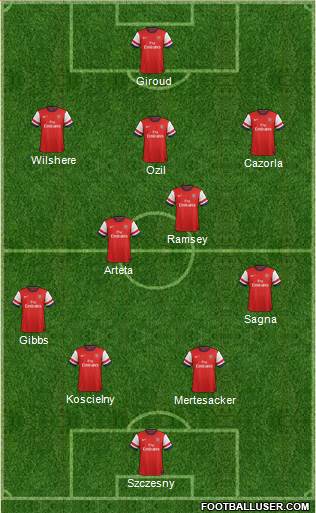 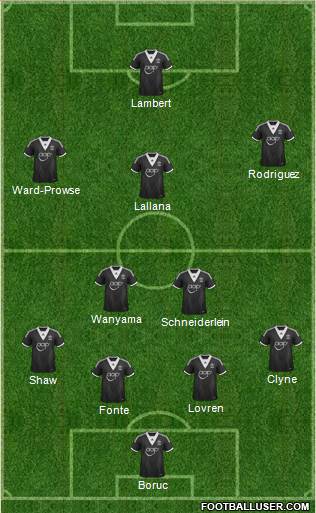 Enjoy the game wherever you are. COYG!

What are your thoughts on the game? Share them below.