Chelsea take on Southampton on Sunday afternoon hoping to close the gap at the top of the Premier League. Here’s the predicted Chelsea team for the game.

Chelsea take on Southampton on Sunday afternoon hoping to close the gap at the top of the Premier League.

The Blues could be as much as seven points adrift of leaders Arsenal by the time they kick off so victory over the Saints will be vital in keeping pace with the Gunners.

Jose Mourinho is expected to make some changes to his starting line-up after admitting his team looked tired during Tuesday’s 1-0 Champions League defeat to FC Basel.

The Chelsea boss has hinted Ashley Cole could be restored to the starting eleven this weekend after being left out in recent weeks, which could see Cesar Azpilicueta drop out.

Frank Lampard could get a rest after starting in midweek, while Fernando Torres is almost certain to come in after Samuel Eto’o was forced off with a muscle injury against Basel that’s likely to keep him out for around two weeks.

The big decision for Jose is who to start in attack behind the Spaniard. Juan Mata and Andre Schurrle were unused subs in midweek so could be given a chance to impress as they’ll be fresh, while Eden Hazard only played the final 35 minutes.

This would see Oscar – who was excellent against West Ham last weekend – given a well-earned rest as he was withdrawn in the 55th minute on Tuesday after a rather lethargic display.

Here’s the starting line-up Mourinho could go with: 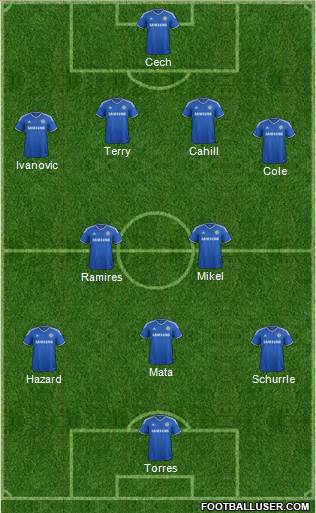