Chelsea take on Sunderland at the Stadium of Light on Wednesday looking to close the gap at the top of the Premier League. Here’s a predicted starting line-up.

Chelsea take on Sunderland at the Stadium of Light on Wednesday evening looking to close the gap on Premier League leaders Arsenal.

Boss Jose Mourinho confirmed at his press conference on Tuesday that midfielder Oscar has been ruled out of the game after suffering an ankle injury last time out, so Juan Mata should get the chance to impress in his preferred central position.

With Mata moving inside it could see Andre Schurrle being given the opportunity to come in on the left with Eden Hazard continuing on the right hand side at the attack.

Frank Lampard may also get a recall having been among the subs at the weekend with Michael Essien likely to miss out following a disappointing outing against Southampton.

Mourinho also confirmed that Ashley Cole will start one of the next two games after seeing Cesar Azpilicueta take his starting berth at left-back, and I think the Portuguese coach may opt to start the England man against Sunderland and bring Azpilicueta back in for the trip to Stoke City.

Samuel Eto’o is back in the squad after recovering from a leg injury quicker than expected, but Fernando Torres may retain his place up front.

Here’s the starting line-up Mourinho may go with: 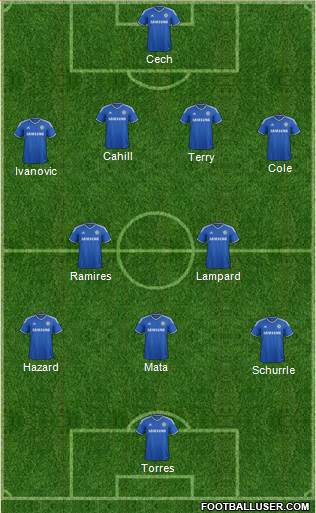