Chelsea travel north to take on Sunderland at the Stadium of Light on Tuesday night in the quarter final’s of the Capital One Cup. Here is our predicted line-up

Chelsea travel north to take on Sunderland at the Stadium of Light on Tuesday night in the quarter final’s of the Capital One Cup.

The Blues warmed up for the game with a 2-1 win over Crystal Palace in the Premier League on Saturday and Jose Mourinho is set to reshuffle his squad for this League Cup clash.

Mark Schwarzer is likely to step in for Petr Cech in goal while John Terry will be rested ahead of Monday’s trip to the Emirates to take on leaders Arsenal, so Gary Cahill should return to play alongside David Luiz in defence.

Ashley Cole is expected to start at left-back with Cesar Azpilicueta potentially switching to his more familiar right-back slot so Branislav Ivanovic can have a breather. John Obi Mikel and Frank Lampard didn’t feature against Palace at the weekend so should start in midfield, while Kevin De Bruyne and Andre Schurrle could get a start in attack.

Oscar was a second half substitute on Saturday so is expected to play from the start and Samuel Eto’o may be the man to spearhead the front-line with Fernando Torres dropping out. 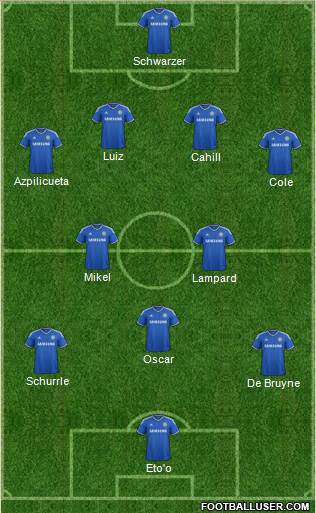