Arsenal entertain Cardiff City at the Emirates Stadium on New Years Day looking to cement their place at the top of the Premier League. Here’s a predicted team.

Arsenal entertain Cardiff City at the Emirates Stadium on New Years Day looking to cement their place at the top of the Premier League.

The north Londoners head into the New Year sitting top of the table following Sunday’s 1-0 win over Newcastle United and another win over Cardiff will move them a step closer to ending their much talked about trophy drought.

Arsene Wenger has suggested he may be forced to rest striker Olivier Giroud for the game which could see Nicklas Bendtner start up front. Lukas Podolski is another option but the Gunners boss has hinted he’ll continue to use the German cautiously following his four month lay-off.

Mikel Arteta could come back in to midfield after being named among the subs at the weekend while Jack Wilshere could be pushed further forward with Mesut Ozil ruled out with a shoulder injury.

Aaron Ramsey is also out so Mathieu Flamini could partner Arteta at the base of midfield. Santi Cazorla was disappointing against Newcastle but is likely to retain his place, although Wenger could opt to give some game-time to one of his youngsters such as Ryo Miyaichi or Serge Gnabry. 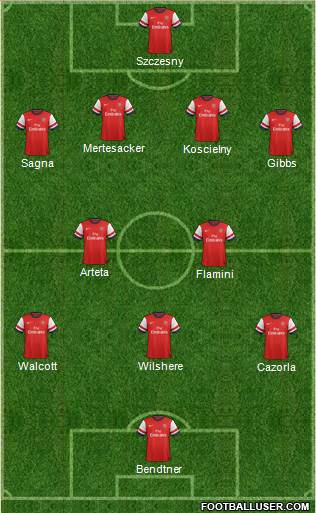 What do you think of our team? What team would you like to see Wenger play? Share your views below.