Chelsea will be on the South Coast to take on Southampton on New Years Day looking to continue their Premier League title push. Here’s our predicted line-up.

Chelsea will be on the South Coast to take on Southampton on New Years Day looking to continue their Premier League title push.

The Blues moved up to third in the table – just two points off leaders Arsenal – with a 2-1 win over Liverpool on Sunday afternoon so they will be hoping to keep up the momentum with another win over the Saints on Wednesday.

Jose Mourinho deployed David Luiz in midfield last time out but the Brazilian will serve a one-game ban having picked up his fifth booking of the season. Frank Lampard was forced off at half-time against the Reds so may miss out meaning John Obi Mikel and the returning Ramires could start in midfield.

Branislav Ivanovic is a doubt with a groin injury so Cesar Azpilicueta could revert to his more familiar right-back slot with Ashley Cole coming in on the left side of defence.

Mourinho may decide to reshuffle his front-line with Juan Mata, Andre Schurrle and Fernando Torres all pushing for recalls, and Samuel Eto’o could drop to the bench despite scoring the winner at the weekend.

Here is the team the Portuguese coach could go with: 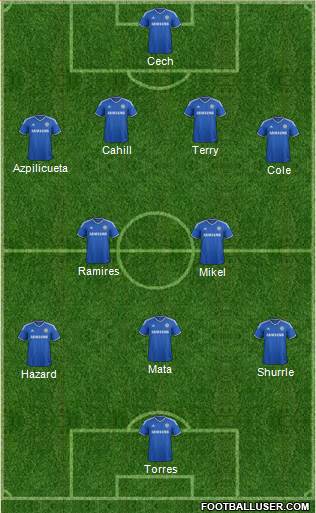 What do you think of our team? What would your’s be? Share your suggestions below.