Chelsea take on high-flying Championship outfit Derby County on Sunday afternoon in the third round of the FA Cup. Here is a match preview including team news.

The Blues head into the game in good form having secured successive victories over Swansea, Liverpool and Southampton over the festive period.

The wins helped guide the club to third in the Premier League table – just two points off leaders Arsenal – so the west Londoners are well positioned to make a real push for the title this season.

However, it’s Cup duties that are on the agenda this weekend and Jose Mourinho confirmed at his press conference on Friday that he won’t be taking Derby lightly and will resist the temptation to blood his youngsters in the game, by insisting he will field a strong line-up.

Derby are also going well, sitting fourth in the Championship table, but Chelsea have an imperious record in the FA Cup in recent years so Steve McClaren will have his work cut out in trying to pull off a third round shock at Pride Park.

While Mourinho has claimed he won’t field a weakened team, he’s still expected to rotate his line-up and has already confirmed that Mark Schwarzer will start in goal with Petr Cech given a breather.

The likes of John Terry, John Obi Mikel, Eden Hazard and Fernando Torres could all also be handed well-earned rests.

Defender David Luiz is available again having served his one-match ban so should take his place alongside Gary Cahill at the back. Cesar Azpilicueta should continue at right-back with Branislav Ivanovic out with a thigh problem, so Ashley Cole is expected to start on the left.

Frank Lampard is out for three weeks with a muscle injury so Michael Essien could get a run out in midfield while Willian, Oscar and Andre Schurrle could be selected in attack behind Samuel Eto’o. 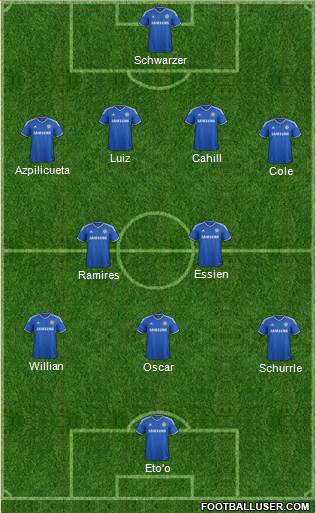 Oscar: Much of the spot-light was on the Brazilian for his inexcusable dive on Wednesday but he also had a fine game against the Saints and Derby will have to keep him under wraps if they want to pull off a shock win.

Derby 1-3 Chelsea: Despite making some changes we think the Blues will still have too much for the Championship outfit to handle and will ease into the fourth round.

What line-up do you think Mourinho should select? What’s your score prediction? Share your views below.