Chelsea confirmed the signing of Serbian international midfielder Nemanja Matic from Benfica on Wednesday evening. Here’s how the could line-up with in future.

With the January transfer window now open for business clubs will be working hard to try and strengthen their squad for the second half of the season, so we’ll keep you up-to-date with all the latest news, gossip and rumours. Today, Chelsea complete the signing of Nemanja Matic.

The Blues officially announced the deal on Chelseafc.com, confirming the 25-year-old has signed a five-and-a-half-year contract and while they failed to disclose the exact amount they had paid, the BBC claim the figure is €25m (£21m).

It’s certainly a huge outlay for a player who was valued at around £3m just two-and-a-half years ago when he was used as a make-weight in the deal that saw David Luiz move to Stamford Bridge. However, Jose Mourinho clearly rates him highly and has wrapped up his first major piece of business in the January window.

Upon signing his contract, Matic told the clubs official website:

‘I am very happy for this opportunity to be back at this club. I feel very good because of that and just want to say I will give my best to help the team and make the Chelsea fans happy.’

Mourinho was also delighted to have brought the player back to west London, claiming he has developed during his time in Portugal and is now a ‘fantastic all-round midfielder’:

“I am very pleased that Nemanja is returning to Chelsea. He has grown as a player in Portugal and has become a fantastic all-round midfielder. I am sure he will become a very important member of the squad and help us to achieve our ambitions.’ Mourinho is quoted as telling Chelseafc.com

Matic has been handed the No.21 jersey and is expected to go straight into the squad to face Manchester United on Sunday. However, it remains to be seen whether he’ll start or be among the substitutes.

Long-term, the Serb is expected to become an integral part of Mourinho’s first team plans and is likely to replace 35-year-old Frank Lampard in the starting eleven. John Obi Mikel has only recently come back in to favour while Lampard has been out through injury, and with the Blues splashing out over £20m on him, you’d expect Matic will start ahead of the Nigerian the majority of the time.

So with that said, here’s a look at how Mourinho’s strongest eleven could look following the signing of Matic: 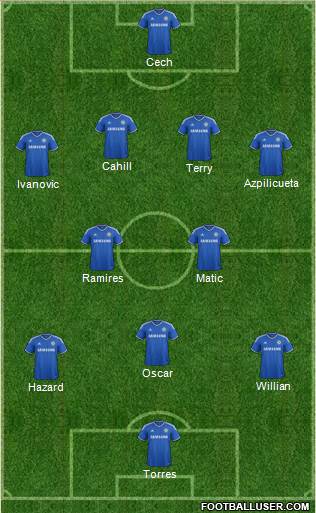 What do Chelsea fans think? Is this now your strongest eleven? Or should Frank Lampard still command a first team place? Give us your suggested line-ups below.