Arsenal welcome Sunderland to the Emirates tomorrow looking to keep pace with Chelsea at the top of the table, here’s Gooner Mac’s predicted team for the game.

Arsenal welcome Sunderland to the Emirates tomorrow looking to keep pace with Chelsea at the top of the Premier League table, here’s Gooner Mac’s predicted team for the game.

The game will have taken a lot out of the players as we had to dig deep for over 50 minutes with 10 men, so I think we’ll see some changes, particularly in attack.

Olivier Giroud was surprisingly left out in midweek but the boss hinted today that the Frenchman will be back in the team tomorrow, so youngster Yaya Sanogo will drop back to the bench.

Alex Oxlade-Chamberlain has started the last three games so I think we might see him given a breather with Tomas Rosicky likely to come back in, while Lukas Podolski could also be given a rare start after not featuring against his former side on Wednesday.

Mikel Arteta is back from suspension and could replace Mathieu Flamini in midfield, but Kieran Gibbs will miss the game after picking up a buttock injury in the first half against Bayern, so Nacho Monreal will start at left-back.

A lot of talk has centered around Mesut Ozil after his penalty miss and there are some calling for him to be dropped after a disappointing display against the Germans. However, I think Wenger will stick with him and give him the chance to bounce straight back. If his confidence is already low, being dropped to the bench isn’t going to do him any good is it? 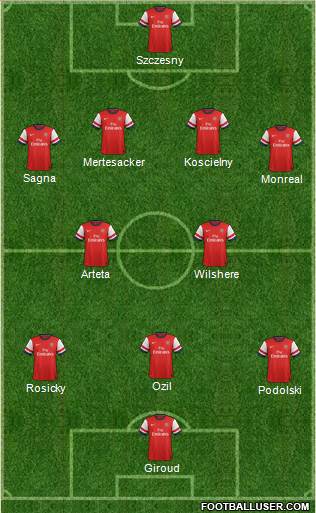