Arsenal get back to domestic action this weekend following the international break as they welcome Everton to the Emirates. Here’s our predicted team.

Arsenal get back to domestic action this weekend following the international break as they welcome Everton to the Emirates on Saturday for their FA Cup quarter final clash.

Arsene Wenger must be cursing his luck following the news that Jack Wilshere has been ruled out for six weeks after fracturing a bone in his left foot while playing for England on Wednesday night. It’s obviously a huge blow to lose Jack for whats going to be a season-defining period, but we have to get on with it and make do with those players that are available.

The likelihood is that Arsene Wenger will choose to start Mikel Arteta alongside Mathieu Flamini this weekend, although Tomas Rosicky could be another option in the middle. Alex Oxlade-Chamberlain is expected to start on the wing as he was one of the few players to come away from our defeat at Stoke last week with any credit.

At the back we have a slight doubt over Laurent Koscielny after he missed France’s game last night with a tight hamstring, but he should be okay to face Everton on Saturday and line-up alongside Bacary Sagna, Per Mertesacker and Kieran Gibbs at the back.

Lukasz Fabianski has played in all the previous rounds so I expect he’ll continue in goal, Mesut Ozil is expected to come back in having not started the last two games while Lukas Podolski could keep his place on the left if Arsene plans to rest Cazorla ahead of Tuesday’s clash with Bayern Munich.

While I don’t agree with it, I have a feeling the boss is going to give Olivier Giroud a breather and start Yaya Sanogo up front. The youngster has done well enough in his appearances so far, so let’s hope he can put in a good shift this weekend if he’s given the chance. 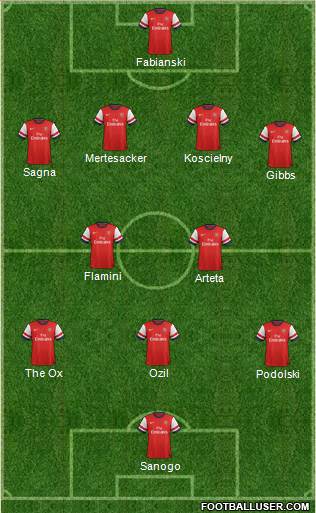 My personal choice would be to play our best team, start Rosicky, Cazorla and Giroud, and really go for the FA Cup, but I think Arsene is going to continue to make changes particularly with Tuesday Bayern game in mind. We’ve gotten away with it in previous games against the likes of Tottenham and Liverpool, so let’s hope it doesn’t backfire this time around.