The Blues were boosted by the return to full training of defender David Luiz on Monday. The Brazilian hasn’t played since picking up an injury while away with the national team earlier this month but while he’s back in contention, he’s unlikely to start with Jose Mourinho expected to continue with Gary Cahill and John Terry at the back.

Ashley Cole remains out with an injury that’s already kept him out of their last two games, so Cesar Azpilicueta will retain his place at left-back while Branislav Ivanovic continues at right-back.

Nemanja Matic is ineligible so Mourinho has a void to fill in midfield and it could see Frank Lampard recalled along with John Obi Mikel, while Ramires could be moved further up field to offer more protection. Willian was dismissed against Aston Villa on Saturday so won’t be able to play versus Arsenal at the weekend, which could see Mourinho start the Brazilian tomorrow night along with Eden Hazard.

It will be interesting to see who starts up front. Samuel Eto’o missed the weekend defeat with a knock so Fernando Torres could continue up top. Here’s the team we think Mourinho will go with: 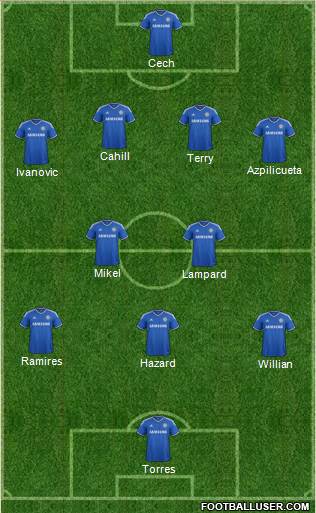