Arsenal welcome Manchester City to the Emirates Stadium on Saturday evening. Here’s a preview with team news, likely line-ups and predicted score for the game.

Arsenal welcome Manchester City to the Emirates Stadium on Saturday evening with both sides looking for a win to boost their title aspirations.

The Gunners hopes of landing their first Premier League trophy since 2004 hang in the balance after a disappointing week that saw them pick up just 1 point from two games. The North Londoners followed on from last weekend’s humiliating 6-0 defeat to Chelsea by conceding a last minute equaliser to draw 2-2 at home to Swansea on Tuesday night.

The results have left Arsene Wenger’s men sitting fourth in the table, three points adrift of third-placed Man City – who have two games in hand – and six off leaders Chelsea, so only a win will do tomorrow if they are to maintain any realistic hopes of winning the title.

The visitors on the other hand are now the bookies favourites to be crowned champions after a convincing 3-0 win over Manchester United on Tuesday followed the 5-0 thrashing of Fulham last week.

Manuel Pellegrini’s side are well positioned just three points off Chelsea with two games in hand, so victory at the Emirates will further strengthen their chances of lifting their second title in three years.

The reverse fixture was a veritable goal-fest with the Citizens running out 6-3 victors at the Etihad, and the neutrals will be hoping for more of the same this time around.

While Arsene Wenger had no new injuries to report at his press conference on Friday, he still has a lengthy injury list to contend with leaving him with limited options to make changes to his team.

The duo join Mesut Ozil, Theo Walcott and Jack Wilshere on the sidelines, and with Laurent Koscielny also still out with a calf strain, skipper Thomas Vermaelen will continue alongside Per Mertesacker at the back.

There was some positive news with Wenger confirming today that Abou Diaby is due back in training on April 1st after more than a year out with a serious knee injury.

City will continue to be without key striker Sergio Aguero with the Argentinean needing more time to overcome a hamstring injury picked up against Barcelona, so Edin Dzeko is expected to continue to lead the attack after his double against United in midweek.

Centre-back Matija Nastasic is also still out with a knee injury so Pellegrini is likely to stick with Demichelis alongside Kompany at the back. David Silva has been passed fit despite feeling discomfort in his foot after the game on Tuesday. 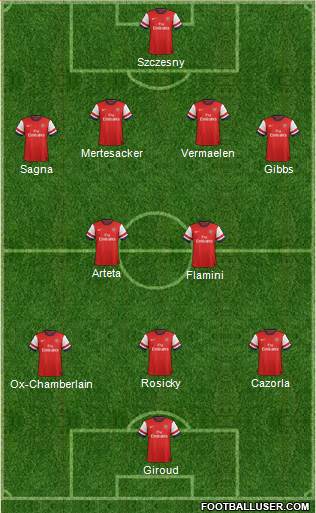 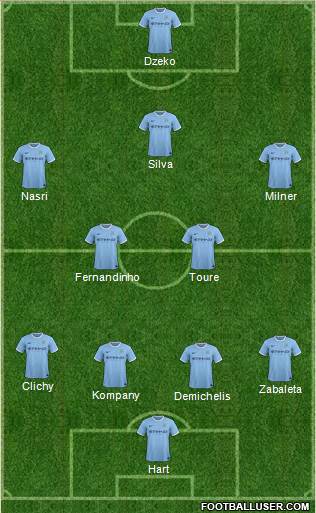 David Silva: It will come as a huge boost to City that the Spaniard has been passed fit as he’s central to their attacking play. Arsenal are going to have to find a way to keep him off the ball if they want to stop the visitors from scoring.

Arsenal 2-2 Man City: The Gunners have stuttered at just the wrong time but they still have a very good record at home and we can see the goals flying in again tomorrow, but with the north Londoners taking something away from the game this time.