Manchester United entertain Bayern Munich at Old Trafford this evening in the first leg of their Champions League quarter final tie. Here is a preview.

United head into the game as huge underdogs as the face the monumental task of trying to beat the reigning champions over two legs. David Moyes men have endured a disastrous season and have come unstuck time after time against the big sides, and this was the case once again during recent 3-0 home defeats to Liverpool and Manchester City.

Their domestic form remains a huge concern and despite a 4-1 comeback win over Aston Villa on Saturday, United still sit seventh in the Premier League table – a full 10 points off fourth-placed Arsenal – so it looks likely they will have to win the competition outright this season to be competing in the Champions League again next year.

If they are to go all the way, they will have to beat a Bayern side that has recently won the Bundesliga in record time and has won their last seven away games in Europe, as Pep Guardiola has somehow improved upon the treble-winning side of last season.

United needed to come from two-goals down to get past Olympiakos in the previous round, while Bayern saw off Arsenal despite being held to a 1-1 draw in the second leg at the Allianz Arena, but it’s the Germans who are the odds on favourites to progress to the last four.

Moyes is sweating on the fitness of right-back Rafael after the Brazilian was forced off at half-time on Saturday with a hamstring injury. He failed to train on Monday so it’s looking unlikely he will feature which may see Chris Smalling deputise after he overcome his own hamstring injury.

Patrice Evra is suspended but his replacement Alex Buttner is fit after a minor hamstring scare, while Jonny Evans  and Rio Ferdinand could be in contention after recovering from calf and back injuries respectively.

Antonio Valencia is expected to return to the starting line-up after a knee problem, but Tom Cleverley is set to miss out after missing training with an unspecified injury. Juan Mata is cup-tied which should see Shinji Kagawa continue in attack but Robin van Persie remains out with a knee injury.

Moyes could once again call upon veteran Ryan Giggs to add some big-game experience to the side after the Welshman starred in the 3-0 win over Olympiakos, so Marouane Fellaini is likely to make way.

Bayern will be without the services of midfielder Thiago Alcantara after he damaged knee ligaments at the weekend, so Philipp Lahm could move into midfield.

Javi Martinez is likely to drop back in to defence with Dante out through suspension and Holger Badstuber injured, while Rafinha could come in at right-back. 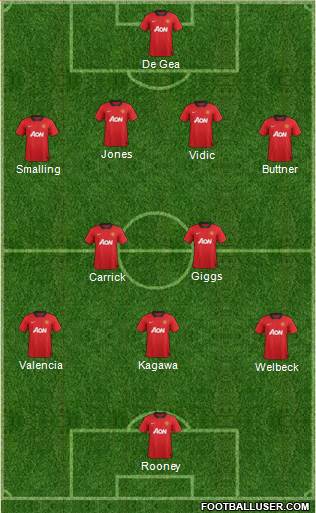 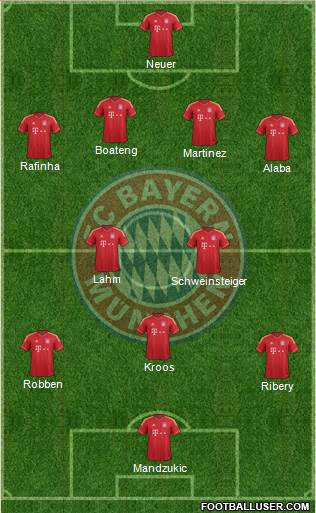 Frank Ribery: The Frenchman is one of the best wingers in the world and he will fancy his chances up against Chris Smalling if he’s forced to fill in for Rafael at right-back.

Man Utd 1-3 Bayern Munich: United’s form in Europe has been very good but they haven’t faced a side nearly as talented as Bayern, so it’s difficult to see them taking anything away from the game tonight.