Arsenal take on Everton at Goodison Park on Sunday afternoon looking to tighten their grip on the fop-four. Here is a predicted line-up from Gooner Mac.

Arsenal take on Everton at Goodison Park on Sunday afternoon looking to tighten their grip on the fop-four. Here is a predicted line-up from Gooner Mac.

Boss Arsene Wenger confirmed the good news earlier today that Aaron Ramsey is back in the squad having returned to full training this week. However, the Welshman has only had a couple of days with the rest of the squad and he’s going to need some time to get back up to speed, so I think we’ll see him come off the bench on Sunday.

That will mean that Mikel Arteta and Mathieu Flamini should continue in midfield with Jack Wilshere out injured and Kim Kallstrom still finding his feet in English football.

Arsene also revealed that Kieran Gibbs is a doubt with an ankle problem and with Nacho Monreal available again after recovering from a foot injury, I think we’ll see Gibbsy given a breather ahead of next weekend’s FA Cup semi final.

Laurent Koscielny is still short of fitness so Thomas Vermaelen will continue alongside Per Mertesacker at the back while I think we’ll see Lukas Podolski drop out for Alex Oxlade-Chamberlain, despite the German’s excellent return of one goal and two assists in his last two appearances.

Mesut Ozil and Theo Walcott remain out, while Serge Gnabry is a doubt with a knee injury, so we don’t have too much room to make other changes even if we wanted to. Olivier Giroud is expected to lead the line up front once again with youngster Yaya Sanogo offering support from the bench.

So here’s the team I think Arsene will put out: 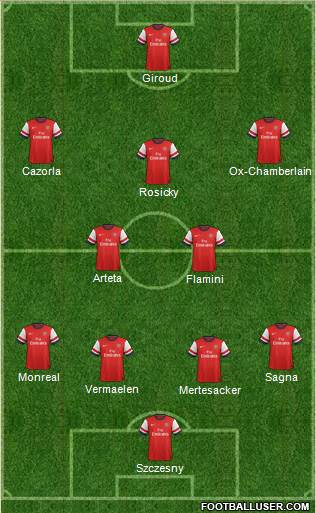 What do you think of my team? What line-up would you select? Share your views below.