Arsenal will look to kick start their Champions League campaign when they entertain Galatasaray at the Emirates on Wednesday. Here is a predicted team.

Arsenal will look to kick start their Champions League campaign when they entertain Galatasaray at the Emirates on Wednesday night. Here is the team Gooner Mac thinks Arsene Wenger will select:

Goalkeeper: No question that Wojciech Szczesny will start ahead of David Ospina in this game.

Defence: The boss has very little options to change things up in defence as Mathieu Debuchy and Nacho Monreal are still injured. It means Calum Chambers should continue at right-back unless Wenger wants to give another chance to Hector Bellerin – who made his full debut during our 2-0 loss to Borussia Dortmund two weeks ago.

Midfield: Aaron Ramsey and Mikel Arteta are both out for up to four weeks with injuries they picked up against Tottenham on Saturday. This means that Mathieu Flamini is certain to start but it’s difficult to know who will partner him. Jack Wilshere is in the squad despite twisting his ankle at the weekend but Arsene has confirmed he’s considering leaving him out with Sunday’s big game against Chelsea in mind.

I feel it would be a big risk to play Jack so I think we’ll see Alex Oxlade-Chamberlain come in and start in midfield. Abou Diaby could have been an option but Wenger doesn’t think he’s match fit just yet.

Attack: With The Ox likely to play in the middle it will allow Alexis Sanchez to return to the starting eleven on the right wing, with Mesut Ozil and Santi Cazorla making up a front three supporting Danny Welbeck in attack.

This is how I think we’ll see Arsenal line-up tomorrow: 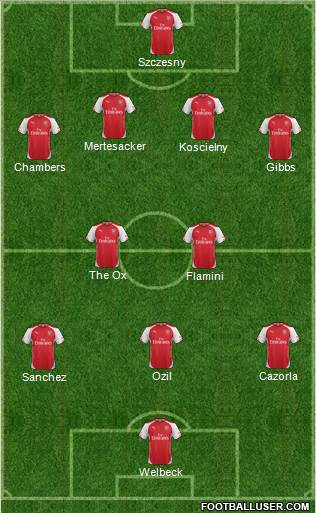 What do you think of the team? What side would you pick for the game?