Liverpool have stolen a march on Arsenal after tabling a €40m (£31.2m) offer for unsettled Napoli striker Gonzalo Higuain, according to reports today.

The summer transfer window may be closed but managers are already thinking ahead to future transfer windows so we’ll bring you all the latest news and gossip. Today, Liverpool are linked with Arsenal target Gonzalo Higuain. 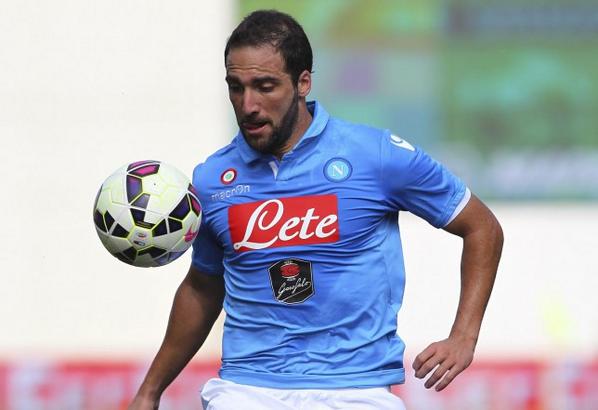 Liverpool have stolen a march on Arsenal after tabling a €40m (£31.2m) offer for unsettled Napoli striker Gonzalo Higuain, according to reports.

Higuain was strongly linked with a move to the Premier League when he left Real Madrid in the summer of 2013 with Arsenal reportedly coming close to agreeing a deal before he sealed a £35m move to Napoli.

He was an instant hit in Naples as he scored 24 goals in 46 appearances during his debut season in Italy, but things haven’t been goal so well for the Argentinean this campaign as he’s yet to find the back of the net in any of his 5 Serie A appearances so far.

There is widespread speculation that the striker isn’t happy which has led to reports he could be on the move when the transfer window opens in January, with Arsenal and Liverpool among the clubs understood to be keeping a close eye on his situation.

However, it appears the Merseysiders have moved ahead of the Gunners in the race for Higuain’s signature as the Express are claiming that Liverpool have now tabled a €40m (£31.2m) offer for the 26-year-old hitman.

It’s not clear how this supposed offer was received but if Higuain is unsettled and wants a move, then this kind of bid would give the Italians a chance to redeem a sizeable portion of the fee they paid Madrid 15 months ago.

Napoli are currently in some financial difficulties which weren’t helped by their failure to qualify for the group stages of the Champions League, so they could be tempted to cut their losses on Higuain and cash-in on one of their most valuable assets to help ease their money worries.

Liverpool splashed out £16m on Mario Balotelli in the summer but the gamble hasn’t paid off as he’s been largely disappointing with just one goal to his name so far, while main striker Daniel Sturridge has seen his season hampered by a number of injury issues.

Therefore, it wouldn’t be a surprise to see Brendan Rodgers enter the market in January to try and bring in another option in attack and there aren’t many better out-and-out goal-scorers around than Higuain.

It remains to be seen how Arsenal will react to the news that Liverpool have stepped up their interest but I’d personally be surprised if Arsene Wenger was to spend big on another forward after signing Danny Welbeck and Alexis Sanchez in the summer.

The only way it could happen is if Lukas Podolski forces a move away this winter but Wenger is adamant the German international is going nowhere, so I think Liverpool could have a clear run if Higuain wants to try his luck in England.