Chelsea are lining-up a shock move for Manchester United target Gerard Pique and are ready to test Barcelona’s resolve with a €30m bid this January.

The summer transfer window may be closed but managers are already thinking ahead to future transfer windows so we’ll bring you all the latest news and gossip. Today, Chelsea are ready to bid for Barcelona defender Gerard Pique. 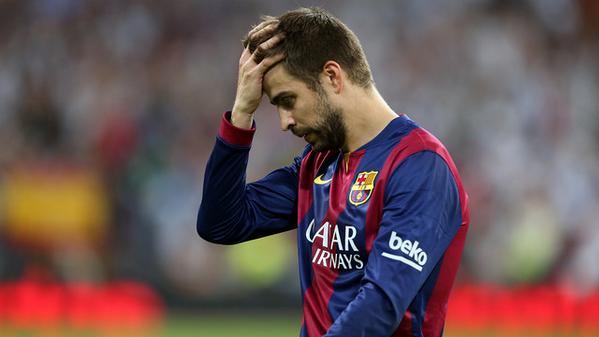 Chelsea are lining-up a shock move for Manchester United target Gerard Pique and are ready to test Barcelona’s resolve with a €30m bid this January, according to reports.

Having spent four years at Old Trafford, Pique rejoined Barca from United in 2008 after initially being plucked from the Catalans youth academy by the 20-time Premier League champions in 2004.

The centre-back has enjoyed huge success back at the Nou Camp, winning four La Liga titles and two Champions League’s during the last six years, but he’s suddenly come under a huge amount of criticism over the past few months and was slammed for his display during a 3-1 defeat to bitter rivals Real Madrid on Saturday evening after giving away a cheap penalty with Barca leading 1-0.

This has led to speculation that Luis Enrique may be prepared to cash-in on the 27-year-old and reports have suggested that a return to United could be on the cards with Louis van Gaal keen to strengthen his defence after a hugely inconsistent start to his reign at Old Trafford.

However, it appears United face some stiff competition for Pique’s signature as the Daily Star cite reports coming from Spanish website Fichajes that claim Chelsea are now planning a surprise move during the upcoming January window.

Jose Mourinho has few options behind first-choice centre-back’s Gary Cahill and John Terry other than youngster Kurt Zouma and with a long-term replacement for 33-year-old Terry also going to be needed soon, the newspaper suggests that Chelsea will try to lure Pique back to England this winter and will test Barcelona’s resolve by tabling a €30m (£24m) offer.

It remains to be seen how the Spaniards would react if such a bid was tabled or whether United would look to match it if it was accepted, but the two English giants may find it difficult to persuade the player to make the move as he recently revealed that he has no intention of leaving his boyhood club anytime soon.

“I left a lot of friends there and was really happy there, even if I didn’t play as much as I wanted to.

“But I’ve always said I want to retire here and, if possible, stay here all my career.

“At this moment I’m not thinking about leaving, and I’m really happy if it’s true that United want me… but I want to stay.

“I’m a Barcelona fan, I have been since I was a kid, and I want to stay.” Pique is quoted as saying by the Daily Star

Pique does seem to be going through something of a dip in form of late but there’s no denying he’s a top class centre-back who would be a major coup if either Chelsea or United were able to bring him back to the Premier League.

However, it seems Pique would have to be forced out the door by the Catalans hierarchy and I don’t think Barca would even contemplate selling mid-season, so Mourinho and van Gaal will probably have to look elsewhere if they want to sign another defender in January.