Man Utd are in the capital this weekend as they take on Arsenal at the Emirates on Saturday night. This is the line-up we think Louis van Gaal will select:

Manchester United are in the capital this weekend as they take on Arsenal at the Emirates on Saturday night. This is the line-up we think Louis van Gaal will select:

Defence: The United boss also revealed that Luke Shaw is facing a late fitness test on a knock he suffered while playing for England on Tuesday night but I have a feeling the youngster will take his place in the starting eleven. Jonny Evans and Phil Jones are still short of fitness so Paddy McNair is likely to continue alongside Chris Smalling at the back. Rafael is also still out so Antonio Valencia should keep his place at right-back.

Midfield: Daley Blind is facing a spell on the sidelines with a knee injury he suffered while playing for Holland last week but Michael Carrick is expected to shake off a minor groin complaint so could start in midfield alongside Marouane Fellaini. Adnan Januzaj is probably favourite to start ahead of Ander Herrera and Juan Mata while Angel Di Maria has been passed fit despite picking up a foot injury on international duty.

Attack: Radamel Falcao has been ruled out for another two weeks after suffering a calf problem so Wayne Rooney will continue to support Robin van Persie up front.

So this is the line-up I think we’ll see van Gaal go with against Arsenal: 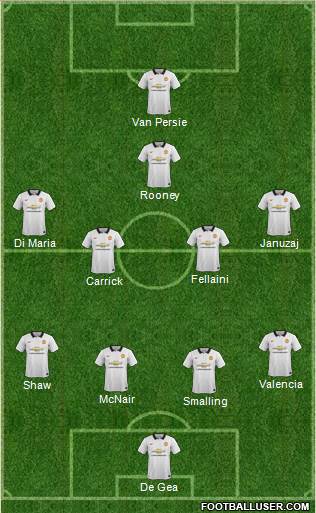