Arsenal will be hoping to make it four wins on the bounce when we take on Stoke at the Britannia on Saturday. Here is the side I think Arsene Wenger will select

Arsenal will be hoping to make it four wins on the bounce when we take on Stoke City at the Britannia Stadium on Saturday. Here is the side I think Arsene Wenger will select:

Goalkeeper: Wojciech Szczesny is set to miss his fourth game in succession due to a hip problem so Emiliano Martinez will keep his place in the side. Even when Szczesny does return, Arsene will have a decision to make as Martinez has played very well over the last couple of weeks.

Defence: Kieran Gibbs was an unused substitute against Southampton after being a big doubt for the game with a hip injury. If he still hasn’t fully recovered then we should see Nacho Monreal continue at left-back after the Spaniard shook-off a foot injury to play against the Saints last night.

Laurent Koscielny’s niggling Achilles problem is being monitored closely by the club but there is no sign he’s in any discomfort so he should start this weekend. Mathieu Debuchy is due back next week but this game will come too soon so Calum Chambers will keep his place at right-back.

Midfield: Jack Wilshere remains out for the foreseeable future with an ankle injury and with Mikel Arteta also out, Mathieu Flamini and Aaron Ramsey are expected to keep their places in the side. Santi Cazorla has been playing superbly in a more central role in recent games so I’d expect him to continue their on Saturday.

Attack: Olivier Giroud made a huge impact off the bench against Southampton and his physical presence will be needed against Stoke, so he should come back into the side. This would see Danny Welbeck move out to the wing with Alexis Sanchez starting on the opposite flank. Alex Oxlade-Chamberlain didn’t look fit to me against Southampton so I wouldn’t be surprised to see him drop out.

Here is how I think Arsenal will line-up this weekend: 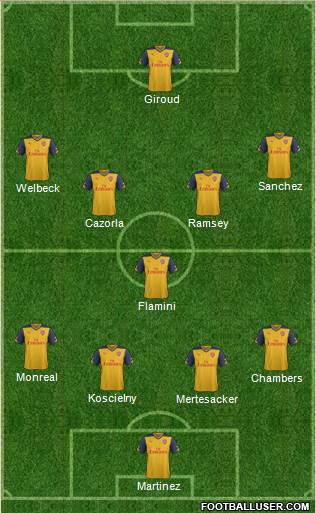