Liverpool are determined to fend off interest from the likes of Arsenal and Manchester United to land £10m Ipswich starlet Teddy Bishop, according to reports.

With the January transfer in full swing, managers are strengthening their squads ahead of the second half of the season, so we’ll bring you all the latest news and gossip. Today, Liverpool are determined to beat Arsenal and Man Utd to the signing of Teddy Bishop…. 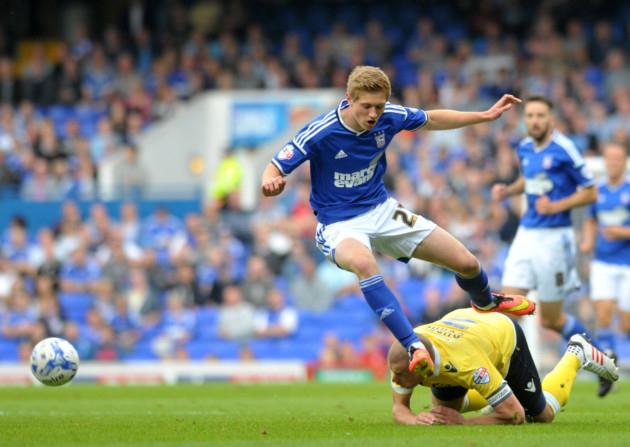 Liverpool are determined to fend off interest from the likes of Arsenal and Manchester United to land £10m-rated Ipswich starlet Teddy Bishop, according to reports.

The 18-year-old has emerged as one of the hottest young properties outside the Premier League after breaking into Mick McCarthy’s starting eleven this season.

Having made his debut in the League Cup in August, Bishop has gone on to make 17 appearance for Ipswich so far this campaign and has scored one and picked up five assists.

His impressive form has alerted a number of top Premier League clubs with the likes of Arsenal, Liverpool and Manchester United all reportedly sending scouts to keep tabs on the teenagers progress.

However, the Mirror claims that Liverpool are now in pole position as Brendan Rodgers is believed to be ‘determined’ to fend off the competition and win the race for Bishops signature.

The newspaper suggests that the Merseysiders have already made a firm enquiry for the midfielder to try and sign him this month but have been told there’s no way they’ll sell as Ipswich have a real opportunity to gain promotion from the Championship this year.

But the Tractor Boys acknowledge that they won’t be able to hang on to the youngster forever and it’s believed they’ll be more open to cashing-in on the £10m-rated starlet at the end of the season, so Liverpool are going to have to bide their time.

Bishops style is that of a deep-lying playmaker and he’s extremely useful with the ball so he’d certainly fit in with the ethos adopted at the likes of Arsenal, Liverpool or United.

All clubs know they have to pay a premium for young English talent so £10m doesn’t sound like an unrealistic figure but the club that does end up winning the race will want to put him through a strict medical as he suffered a serious back injury earlier in his career.