Arsenal have joined Liverpool in tracking Fiorentina keeper Neto as Arsene Wenger contemplates bringing in a new number one this summer, according to reports.

With the January transfer in full swing, managers are strengthening their squads ahead of the second half of the season, so we’ll bring you all the latest news and gossip. Today, Arsenal have joined Liverpool in tracking Fiorentina goalkeeper Neto…. 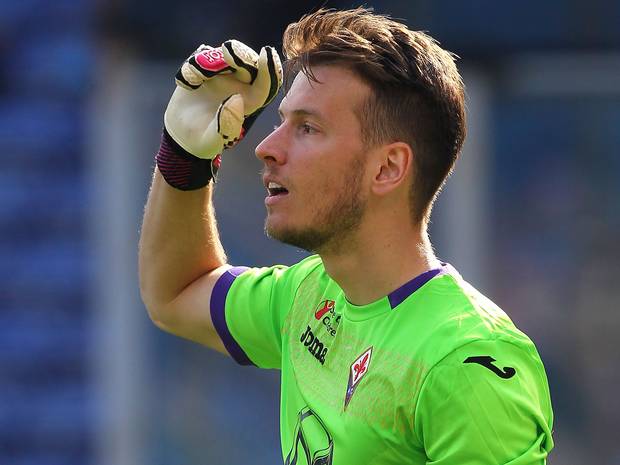 Arsenal have joined Liverpool in tracking Fiorentina goalkeeper Neto as Arsene Wenger contemplates bringing in a new number one this summer, according to reports.

The Gunners boss has recently dropped Wojceich Szczesny after his disappointing display at Southampton, with the Pole at fault for both goals during a 2-0 defeat at St Mary’s on New Year’s Day.

Szczesny was also reportedly disciplined for lighting up a cigarette in the dressing room after the game and it seems he’s now fighting to save his career in North London.

David Ospina has kept goal for the last three games without conceding a goal so there’s no reason for Wenger to consider recalling the Polish international on a permanent basis anytime soon, and it appears the Gunners boss is now lining-up potential targets to replace Szczesny this summer.

The Mirror claim today that Arsenal are in the market for a new stopper and have joined the chase for Brazilian Neto – who has confirmed he’ll leave Fiorentina when his contract expires at the end of the season.

However, if Wenger does decided to make a move for the 25-year-old, then he’ll face some stiff competition as the likes of Liverpool and Juventus have also been strongly linked with a move for the keeper in recent weeks.

Brendan Rodgers is almost certainly going to bring in a new number one in the summer after losing faith in Simon Mignolet, with the Belgian only back in the team due to an injury to Brad Jones.

Petr Cech is another option for both Arsenal and Liverpool as he’s expected to leave Stamford Bridge at the end of the season but with Jose Mourinho likely to be against selling to a direct rival, Neto could be a viable and cheaper alternative.

The South American joined Fiorentina from Atletico Paranaense in 2011 and has grown to become one of the most consistent goalkeeper in Serie A while he’s also on the verge of making his breakthrough into the Brazilian senior national team.