Liverpool will be looking to book their place in the last 16 of the Europa League when they play Besiktas on Thursday night. Here is a predicted line-up:

Liverpool will be looking to book their place in the last 16 of the Europa League when they play Besiktas in Istanbul on Thursday night. Here is the side I think Brendan Rodgers will pick:

Defence: Rodgers will be forced into making some changes at the back as Mamadou Sakho remains out with hip injury so Dejan Lovren will continue in defence. Emre Can is expected to be deployed in midfield so Kolo Toure should come back in alongside Martin Skrtel with Glen Johnson, Jose Enrique and Jon Flanagan all injured.

Midfield: Jordan Henderson has been ruled out with a minor ankle injury so Emre Can is likely to be pushed into midfield tomorrow night. Steven Gerrard is still out with a hamstring injury that’s seen him miss the last three games so he’ll join Lucas Leiva on the sidelines meaning Joe Allen will continue in the middle of the park. Lazar Markovic is suspended so Alberto Moreno and Jordon Ibe are likely to play on the wings.

Attack: Daniel Sturridge was left out of the starting eleven against Southampton on Sunday so he’s expected to be restored to the side tomorrow and should be supported by Raheem Sterling in attack. Philippe Coutinho has been left back in England after being rested by Rodgers ahead of the Man City game so Adam Lallana should keep his place in the side. 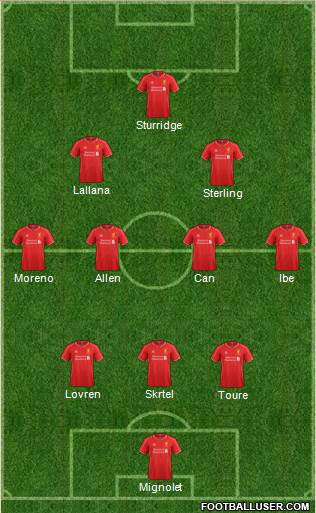