Manchester United striker Robin van Persie has damaged ankle ligaments and is facing up to four weeks on the sidelines, according to the Daily Mail. 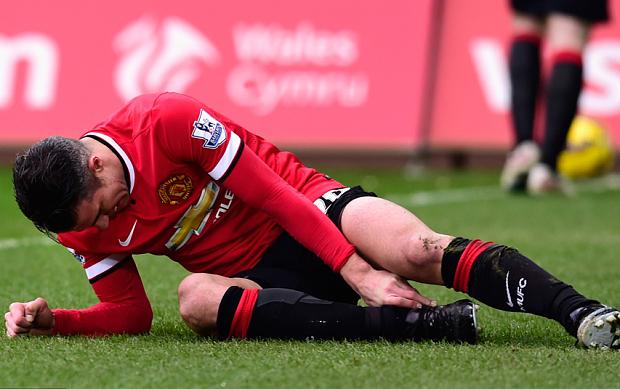 Manchester United striker Robin van Persie has damaged ankle ligaments and is facing up to four weeks on the sidelines, according to the Daily Mail.

van Persie picked up an ankle injury after falling awkwardly as he attempted a cross towards the end of United’s 2-1 defeat to Swansea City last Saturday.

The Dutchman was forced to remain on the pitch as Louis van Gaal had used his three permitted substitutes and he was seen leaving the Liberty Stadium on crutches and wearing a protective boot on his right ankle.

The 30-year-old had scans earlier this week and it looks like it’s bad news for United as the Daily Mail claim the results show he’s damaged his ligaments.

It’s not clear exactly how long the striker will be out for but the newspaper suggests that van Gaal is expected to confirm at his press conference on Friday that he’ll be sidelined for around three to four weeks.

If this prognosis proves accurate, then van Persie is set to miss Saturday’s clash with Sunderland at Old Trafford as well as the trip to St James’ Park to face Newcastle next Wednesday, while he’ll also sit out United’s huge FA Cup quarter final with former club Arsenal on Monday March 9.

If he’s ruled out for three to four weeks then the striker would be forced to miss the following weekends Premier League game with Tottenham at Old Trafford while he’d also be a major doubt for the trip to Anfield to face Liverpool on March 22.

With United in a real fight for a top four position and hoping to reach the semi finals of the FA Cup, it’s a hammer blow for van Gaal to lose his top scorer for what’s going to be a key month in the clubs season.

In van Persie’s absence, the United boss will have to decide whether to move Wayne Rooney back to his usual centre-forward position alongside Radamel Falcao or bring in youngster James Wilson.