Tottenham will look to give their top four hopes a major boost when they take on Man Utd at Old Trafford on Sunday afternoon. Here is our predicted Spurs team

Tottenham Hotspur will look to give their top four hopes a major boost when they take on Man Utd at Old Trafford on Sunday afternoon. Here is the starting eleven I think Mauricio Pochettino will select:

Goalkeeper: Pochettino has no decision to make here. Hugo Lloris is one of the best goalkeepers in the league so he’ll start on Sunday.

Defence: The Argentinean coach has been playing Eric Dier alongside Jan Vertonghen in the middle of defence in recent weeks so it looks like the youngster is favourite to start ahead of Federico Fazio against United. Kyle Walker and Danny Rose should retain their places in the full-back positions.

Midfield: Spurs have a fully-fit squad to choose from so Pochettino is likely to go with Ryan Mason and Nabil Bentaleb in midfield as they’ve forged an excellent partnership this season. Mousa Dembele could also come back in to start just ahead of the duo to offer more protection in the middle of the park as the likes of Etienne Capoue remain out-of-favour.

Attack: Harry Kane is certain to keep his place up front after winning back-to-back Barclay’s Player of the Month awards while I think Andros Townsend is likely to start ahead of Erik Lamela on the right side of attack. With Dembele playing centrally, Christian Eriksen may have to revert to the left wing. 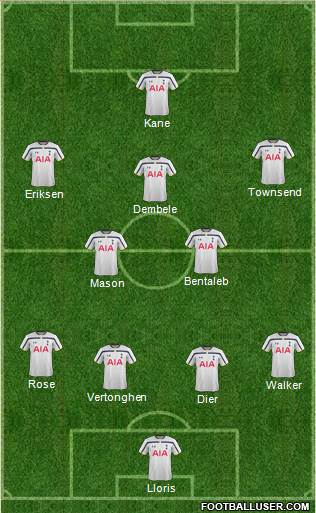