Arsenal will be looking to cement their place in the top four when they take on Liverpool on Saturday afternoon. Here is the side Gooner Mac will start.

Arsenal will be looking to cement their place in the top four when they take on Liverpool at the Emirates on Saturday afternoon. Here is the side Gooner Mac thinks Arsene Wenger will select:

Goalkeeper: David Ospina has firmly established himself as the Arsenal No.1 so I expect him to once again start ahead of Wojciech Szczesny this weekend.

Defence: Gabriel Paulista did well against Newcastle before the international break but I think we’ll see Per Mertesacker restored to the starting eleven on Saturday. Having retired from the German national team, he has had a full two weeks rest and his experience will be important in a big game like this. Mathieu Debuchy could return to the squad after coming through a friendly on Tuesday but I think the Frenchman will only make the bench at best as he’s still not match fit yet. Therefore, Hector Bellerin should start at right-back while we could see Nacho Monreal at left-back ahead of Kieran Gibbs.

Midfield: Francis Coquelin will continue in the holding role but it’s going to be interesting to see who Wenger picks alongside him. Aaron Ramsey’s form has been improving lately while it’s difficult to leave Santi Cazorla out so I think we might see both start in midfield in front of Coquelin. Jack Wilshere and Mikel Arteta stepped-up their comebacks with 45 minutes against Brentford on Tuesday but they are only likely to make the bench at best.

Check out our predicted Liverpool line-up

Attack:  With both Ramsey and Cazorla starting, Mesut Ozil may be forced to play out wide. It’s not ideal but Arsene has done this in the past in big games and I think we’ll see it again on Saturday. Danny Welbeck faces a late fitness test on a knee injury so he’s not 100% fit and Theo Walcott is badly out of form, so Ozil and Alexis Sanchez should start out wide with Olivier Giroud spearheading the attack. 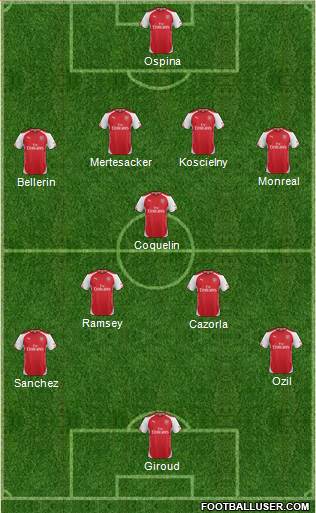