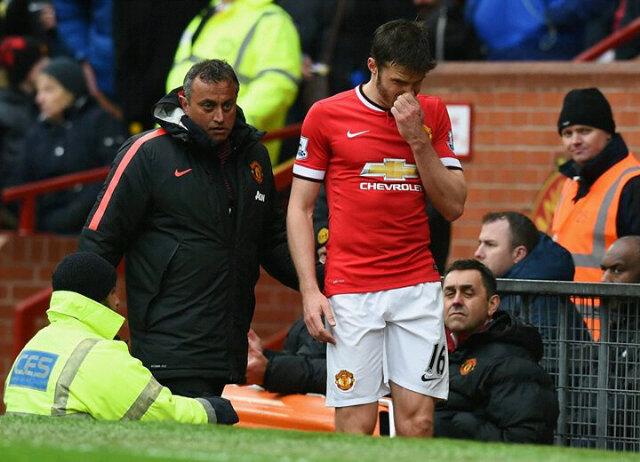 Carrick was forced off during the closing stages of United’s 4-2 victory over Manchester City on Sunday afternoon after picking up a calf problem.

This prompted fears that the 33-year-old may have suffered a recurrence of a calf injury that saw him miss five weeks back in February.

However, van Gaal appears to have played down the latest problem as he told reporters after the game at Old Trafford yesterday that Carrick asked to come off after feeling stiffness in his calf but doesn’t expect it to see him miss Saturday’s trip to Stamford Bridge.

When asked by the media if Carrick was a doubt for the Chelsea game, van Gaal is quoted as saying by the Express:

“He was wise to step off but we have to wait and see tomorrow.

“He had a stiff calf and he is a very experienced player so he asked to leave the pitch. I said: ‘Okay.'”

This is a major boost for United as Carrick has been a key reason for their recent excellent form as the experienced England international has been outstanding at the heart of their midfield.

Carrick missed much of the first half of the season but his return to fitness in November coincided with United’s up-turn in form that’s seen them rise up the Premier League table and to within just one point of second-placed Arsenal following their victory in the Manchester derby yesterday.