Southampton ace Victor Wanyama has been quick to play down reports suggesting he has held talks with Arsene Wenger over a potential move to Arsenal this summer.

As the opening of the summer transfer window approaches, managers are working hard identifying targets and lining-up potential deals so we’ll bring you all the news and gossip. Today, Victor Wanyama dismisses reports suggesting he’s held talks with Arsene Wenger… 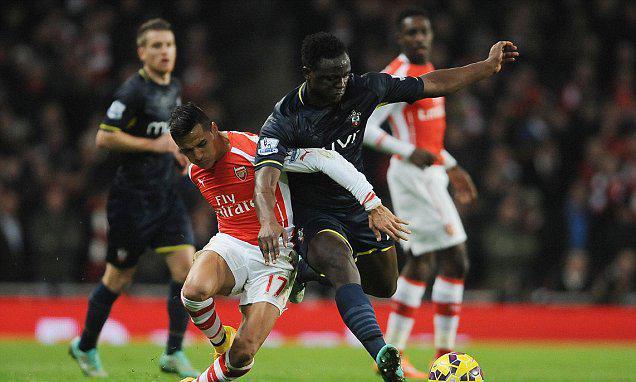 Southampton midfielder Victor Wanyama has been quick to play down reports suggesting he has held talks with Arsene Wenger over a potential move to Arsenal this summer.

Wanyama was quoted in the newspapers this morning as saying that Wenger has made it clear he’d like to sign the powerful Kenyan international this summer.

The player appeared to be open to the move after supposedly calling Arsenal a ‘great club’ and admitting he wants to play in the Champions League again having enjoyed it during his time at Celtic.

Wanyama was quoted as telling the Sun:

“Wenger has been talking about me. And he has let it be known he would like to sign me this summer,” Wanyama told The Sun.

“Arsenal are a great club and I’d love to play Champions League football as I loved being on that stage with Celtic.

“But we’ve had a fantastic season at Saints and I want to stay focused on helping the club qualify for Europe.

“Then we’ll see where I end up in the summer.”

However, the player has taken to Twitter to try and distance himself from these quotes after posting a message on the social networking site saying:

To cut the story short have never spoken to Wenger

Wanyama has excelled at St Mary’s Stadium since making the move from Celtic Park in 2013 and his impressive form has led to speculation linking him with a move, with Arsenal among those believed to be interested.

Wenger is expected to be in the market for a defensive-minded midfielder this summer with Mikel Arteta and Abou Diaby out-of-contract in June, while Mathieu Flamini is also likely to be sold, and Wanyama would be an excellent piece of business if we could pull it off.

It seems as though The Sun newspaper have been embellishing stories again but that doesn’t mean we aren’t interested in signing the 23-year-old and I’m sure he would be keen if the boss was to make a formal move this summer.

So although these so-called quotes may be wide of the mark, there could still be a possibility of Wanyama coming to the Emirates at the end of the season.

We all respect Arsenal but right now I'm only focussed on helping Saints to have a strong finish to the season.

The newspaper article does not say that I have spoken to Wenger or anyone else from Arsenal – and that's the truth.

We are doing so well and what other managers think of me as a player is totally out of my control.