Arsenal, Man Utd, Tottenham and Liverpool all have one player but it’s Chelsea who dominate as 6 of Jose Mourinho’s men are named in the PFA Team of the year

Arsenal, Manchester United, Tottenham and Liverpool all have one player but it’s Chelsea who dominate as 6 of Jose Mourinho’s men are named in the PFA Team of the year….

The Professional Footballers’ Association (PFA) have announced their 2014/15 Premier League Team of the Year this afternoon and unsurprisingly it’s littered with Chelsea players.

The soon-to-be Premier League champions have six representatives out of the eleven with three of the back four featuring Chelsea players as skipper John Terry is joined by Gary Cahill and Branislav Ivanovic in the side.

Nemanja Matic has enjoyed a superb season protecting the back four and he joins attacking duo Eden Hazard and Diego Costa in the eleven.

Arsenal’s Alexis Sanchez has been outstanding during his debut season in England, scoring 14 league goals following his move from Barcelona last summer, so I’m sure it comes as no surprise to see the Chilean make the cut.

Tottenham’s Harry Kane has been one of the shocks of the season and his 20 goals for the North Londoners have ensured he makes the PFA team of the year alongside Liverpool’s Philippe Coutinho, who’s been the stand-out performer in Brendan Rodgers side.

Manchester United also have one representative with David De Gea named in goal after a superb season at Old Trafford while the team is made up by Southampton’s Ryan Bertrand.

Here’s how the PFA Team of the Year line-up: 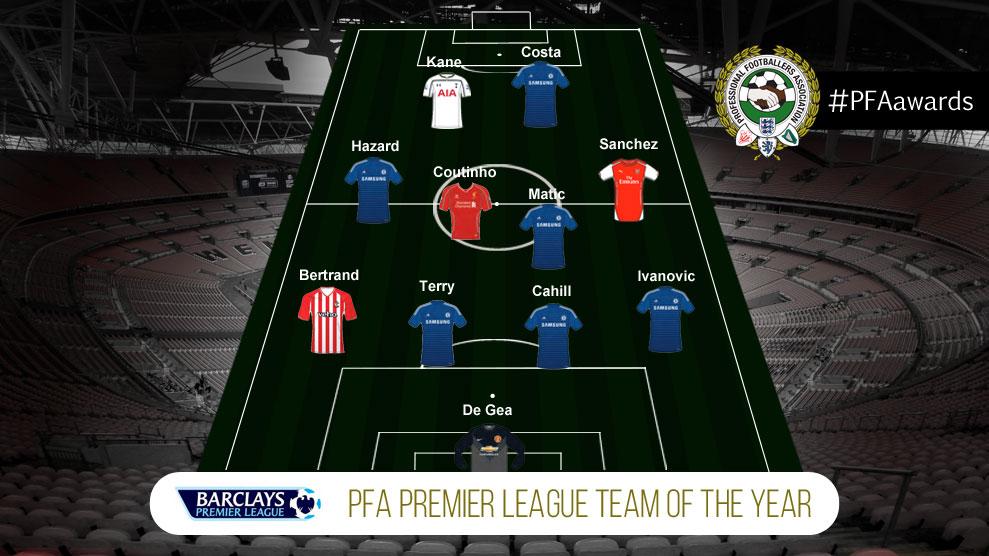