Liverpool have been dealt a major blow as Daniel Sturridge won’t play again this season after undergoing hip surgery in the United States. 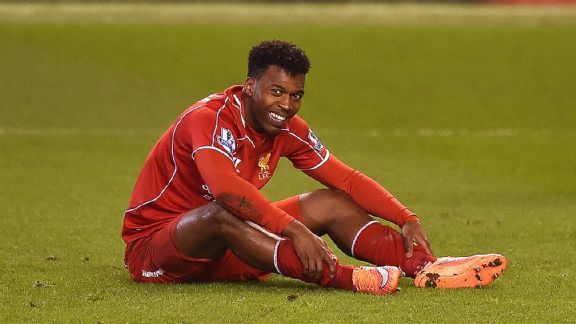 Liverpool have been dealt a major blow as Daniel Sturridge won’t play again this season after undergoing hip surgery in the United States.

The striker has made just two appearances since suffering a hip injury against Manchester United on March 22 and he’s been forced to miss Liverpool’s last five matches.

Brendan Rodgers confirmed last week that the 25-year-old had flown out to Boston to see a specialist to determine whether surgery would be needed to solve the problem once and for all.

Unfortunately it seems the decision to go under the knife has been taken as Sturridge took to Twitter this evening to confirm to his followers that he’s had successful hip surgery today.

Here are the tweets along with a snap of Sturridge in his hospital bed following the surgery:

Just want to let the world know I've had a successful operation on my hip today and I want to thank… https://t.co/Bv46FPQ1ue

The Daily Mail claim that Liverpool decided surgery was the best course of action to prevent Sturridge facing any reoccurences later on in his career and he had the operation in New York on Tuesday afternoon.

The newspaper states that the injury is expected to take six weeks to fully heal, meaning Sturridge won’t play again for Liverpool this season and will also miss England’s end of season international’s against Slovenia and Republic of Ireland.

It’s a huge blow to Liverpool as they’ll now have to make-do without their main striker for the final three games of the season when Brendan Rodgers side are desperately trying to secure European football for next season.

However, it brings to an end a nightmare season for Sturridge as a catalogue of injury problems have restricted him to just 19 appearances in all competitions and there’s no doubt his prolonged absence has had a huge affect on Liverpool’s disappointing campaign.

The Merseysiders will be praying that the striker can now put his injury woes behind him and get fully-fit ahead of next season.