Colombian striker Jackson Martinez has agreed personal terms with Arsenal ahead of a potential €35m move from FC Porto this summer, according to reports.

As the opening of the summer transfer window approaches, managers are working hard identifying targets and lining-up potential deals so we’ll bring you all the news and gossip. Today, Arsenal close in on the signing of Jackson Martinez….

Colombian striker Jackson Martinez has agreed personal terms with Arsenal ahead of a potential €35m move from FC Porto this summer, according to reports.

Martinez is one of the most prolific hitmen in European football and has enjoyed another stunning season in Portugal that’s seen him score 32 goals in 42 appearances in all competitions.

The 28-year-old has long been linked with a move to the Premier League with the likes of Arsenal, Manchester United and Tottenham all reportedly keeping a close eye on his progress.

However, it looks as though the Gunners have stolen a march on their rivals as the Metro are citing reports coming out of Portugal that claim Martinez has agreed personal terms over a potential move to the Emirates this summer.

It’s important to stress at this point that the report indicates that no agreement is in place with Porto as yet, and that Arsenal will most likely have to meet the strikers €35m (£25m) buy-out fee if they want to sign him.

Porto are tough negotiators and while Arsene Wenger is also known to drive a hard bargain, it’s understood the Portuguese giants will demand the full value of the strikers buy-out figure, which would force them to sell.

With that said, the report – which stems from newspaper Jornal di Noticias – claims that Porto are resigned to losing their star striker this summer and Martinez apparently said his goodbyes after last night’s 2-0 win over Penafiel.

We’ll have to wait and see how things develop over the coming weeks but I’m sure the signing of Martinez would go down well in North London. Arsenal are close to being genuine title-challengers but the addition of a top class finisher like the Colombian could make all the difference next season.

However, I wouldn’t discount United just yet. Louis van Gaal is going to be on the look-out for another striker this summer as Radamel Falcao is expected to head back to Monaco when his loan spell ends and Martinez is just the type of striker United need right now.

It will be interesting to see where he ends up if he does leave Porto this summer, but I’d love to see Martinez plying his trade here in the Premier League and it looks as though Arsenal are currently in the driving seat to secure his signature. 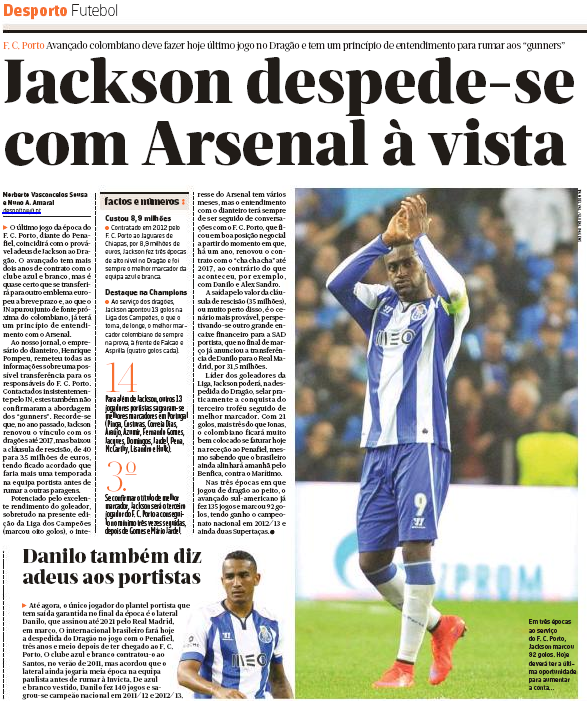