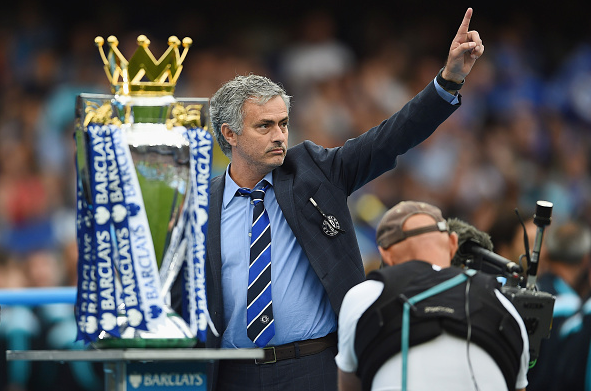 The Blues dominated the Premier League this season, leading the way from the first day of the campaign, and wrapped up the title with three games to spare thanks to a 1-0 victory over Crystal Palace on May 3rd.

Defending champions Manchester City were Chelsea’s closest rivals again this season but ended eight points adrift in second while Arsenal – who have been in superb form since the turn of the year – came third with Manchester United in fourth a full 17 points behind the eventual winners.

Mourinho has come under fire at times this season from rival fans and managers for the clubs style of play, with many claiming the Blues boss ‘parked the bus’ in order to grind out a 0-0 draw or narrow victory.

Mourinho’s tongue-in-cheek speech was accompanied by graphics which were displayed on giant screens. He began by taking aim at United and mocking them for their 1-0 loss at Stamford Bridge, before moving on to City who he says only played ‘with one goal’.

Mourinho then said Arsenal were ‘almost there’ but conceded too many goals and only wanted to play the season from January until August, before rounding off his speech by claiming the Blues won the title by scoring lots of goals, conceding the fewest and ‘sometimes they brought the bus’.

Here is the full transcript of Jose’s speech and you can also see a video below.

“This is a football pitch with two goals, one ball, but there is one team that would like to play without goals,” he said, of the plain red-shirted team.

“And they ask the international board of FIFA to play like this, but they were told that it was not possible, that the bigger percentage of ball possession doesn’t win matches and they were not champions.

“After that there was another team [wearing sky blue shirts] that were less radical and they asked to play only with one goal.

“The third team [red shirts, white sleeves] was almost there, because they wanted to play with two goals. They were scoring some, they were also conceding some. They were fantastic. They scored really beautiful goals, they concede some goals too and they were almost there.

“But they asked the international board to play only between January and April. And they told ‘no chance, no chance.’ You have to play between August and May, so they couldn’t be champions.

“Finally come another team [blue shirts]. They wanted to play with the normal rules and they know that to win matches they had to score one more goal than the opponent.

“How can you do this? By scoring a lot of goals or not conceding and scoring one. And they did it both ways. Scoring a lot, conceding some. Scoring one goal and conceding no goals.

“That was the option and lots of goals were conceding, they played from August till May and sometimes they brought the bus.” source