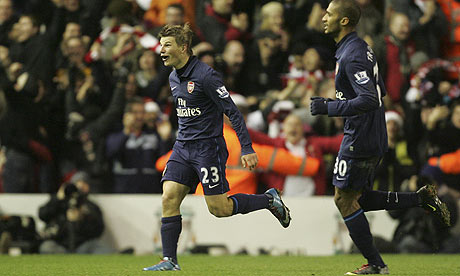 Arsenal came from behind to beat Liverpool 2-1 at Anfield and move up to third in the Premier League, leaving Liverpool lying 7th having lost for the sixth time this season.

Having watched Chelsea, Manchester United, Spurs and Manchester City all drop points on Saturday, both sides knew this was a great chance to take advantage. Arsenal arrived at Anfield having lost 4 from their last 6 in all competitions, Liverpool had only won 3 from their lats 14, so a win for both teams was vital. Rafa Benitez’s side were back to near full-strength with the return of Fernando Torres to make his first start in 5 weeks. Arsene Wenger welcomed back Abou Diaby and Eduardo, but both only made the bench.

Liverpool started the better of the two sides and could have taken the lead within 10 minutes when Gerrard drove down the right hand side, he squared to the un-marked Torres inside Arsenal’s box but the usually deadly Spaniard could only manage a weak effort that was easily saved by Almunia. Then only minutes later Gerrard again charged into the Arsenal area poking the ball past Gallas only for the Gunners defender to dive in with a clumsy challenge sending Gerrard to the floor. Referee Webb had the perfect view but waved for a goal kick to the disbelief of the Reds skipper.

Arsenal finally created their first attempt on Pepe Reina’s goal with half hour approaching when Nasri broke free 30 yards out and sent the ball just wide of the post. With half time approaching Liverpool were awarded a generous free-kick 35 yards from goal after Denilson was adjudged to have fouled Gerrard. Aurelio swung in a cross which Almunia should have dealt with but only managed a weak punch which dropped to Kuyt to poke home from 8 yards to give Liverpool a deserved lead. Wenger claimed Almunia had been fouled but it was poor goalkeeping, simple as that.

Half time and Liverpool would feel agreived to only be 1-up after a poor first half showing from the Gunners.

The second half began and it was clear that Wenger had given his players a dressing down at half time, as they searched for the equalizer. They didn’t have to wait long at Fabregas sent Nasri free down the right, he sent in a low cross which Carragher failed to cut-out and the back-tracking Johnson could only divert into his own net. 1-1 after 50 minutes, game on.

Arsenal had their tails up and were pushing for a second as they sensed Liverpool were nervous and there for the taking.  Fabregas collected the ball and floated in a cross towards Arshavin on the edge of the Liverpool box. Glen Johnson made a half-hearted attempt at cutting the cross out and Arshavin nicked the ball off him, turned and fired a fierce shot which crashed in off the post to give Arsenal the lead. The game had completely turned on its head.

Liverpool looked like a team that had only won 3 from 14 and lacked confidence. Rafa Benitez brought on summer signing Aquilani to try and rescue something from the game but he made little impact. Arsenal were rarely troubled for the remainder of the game and looked comfortable in resisting any rare Liverpool attack. Even Gerrard and Torres couldnt manage to inspire a comeback and the final whistle went to a corus of boos from the Anfield faithful.

3 wins from 15 now for Liverpool and they look in real trouble. While Arsenal couldn’t have wished for a better weekend and are now right back in the title race. Arsene Wenger will now hope for another 3 points away from home at Burnley on Wednesday to keep the pressure on the top two.