Arsenal and Chelsea are ready to battle it out over the signing of £24m-rated Juventus midfielder Kwadwo Asamoah this summer, according to the Daily Star.

As the summer transfer window gets set to open for business, managers are working hard identifying targets and lining-up potential deals so we’ll bring you all the news and gossip. Today, Arsenal and Chelsea are linked with Kwadwo Asamoah…. 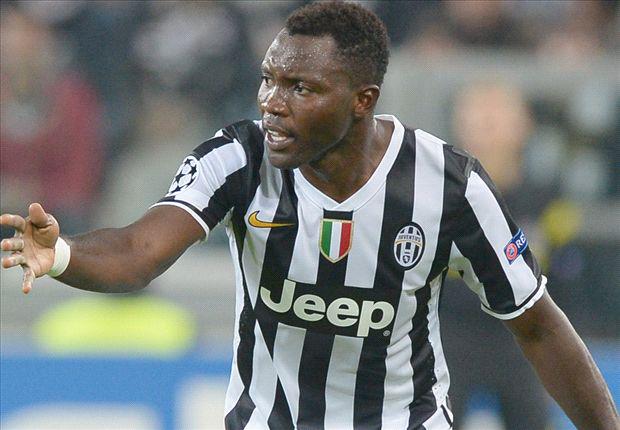 Arsenal and Chelsea are ready to battle it out over the signing of £24m-rated Juventus midfielder Kwadwo Asamoah this summer, according to the Daily Star.

Asamoah made his name at Udinese where he became an integral part of the team having been handed the captains armband at just 22 and his impressive form led to a big-money move to Juventus in 2012.

The Ghana international enjoyed an encouraging start to life in Turin as he was a regular during the Italian giants successive Serie A title wins in 2013 and 2014 but he was restricted to making just 10 appearances last season due to a serious knee injury.

The 26-year-old did return to play the full ninety minutes against Napoli in Juve’s penultimate league game but was subsequently left out of their squad for the Champions League final defeat to Barcelona.

Despite on-going concerns over his long-term fitness, it appears Asamoah has done enough to catch the eye of two of England’s biggest clubs with the Daily Star are citing reports coming from Italy which claim that Arsenal and Chelsea are both showing a keen interest in signing the player this summer.

However, the London duo may have their work cut-out trying to secure a deal as the newspaper suggests that Juve are determined to keep hold of the midfielder and have slapped a £24m price-tag on his head to deter the interested parties.

Asamoah is predominantly a left-sided midfielder but is also capable of playing at left-back or in central midfield so his versatility is sure to appeal to Arsenal and Chelsea.

The Gunners have been tipped to bring in another midfielder this summer as Mikel Arteta is about to be out-of-contract while Mathieu Flamini could also leave the club, so perhaps Arsene Wenger is eyeing Asamoah as a possible new recruit in the middle of the park.

Chelsea have also been strongly linked with several left-backs in recent weeks as doubts continue over the future of Felipe Luis and Asamoah would be more than capable of deputising for Cesar Azpilicueta at left-back when required as well as providing Jose Mourinho with another option in midfield.

However, as useful a signing as the Ghanaian may be, I very-much doubt either club will be prepared to pay the £24m Juve are supposedly demanding, so I personally don’t see anything coming of these reports.