Arsenal In Talks Over £11m Deal For Copa America Star

Arsenal are in talks with Napoli over a potential £11m deal to sign Chile attacker Eduardo Vargas this summer, according to talkSPORT.

With the summer transfer window finally open for business, managers are working hard trying to strengthen their squads ahead of next season so we’ll bring you all the news and gossip. Today, Arsenal are linked with Eduardo Vargas…. 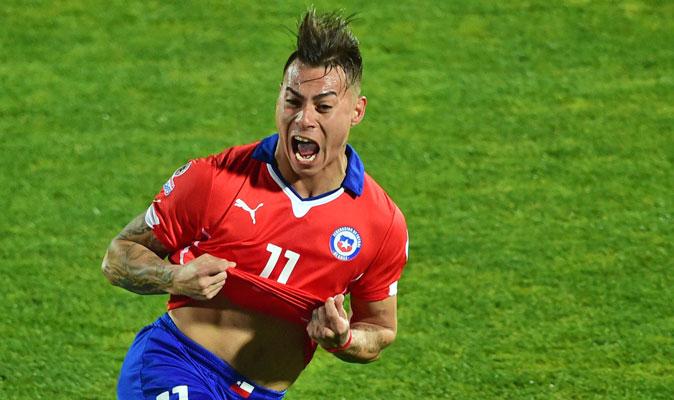 Arsenal are in talks with Napoli over a potential £11m deal to sign Chile attacker Eduardo Vargas this summer, according to talkSPORT.

Vargas has struggled to establish himself at Napoli since joining the club from Universidad de Chile in 2012 and has spent time out on loan in recent years with Gremio, Valencia and most recently Queens Park Rangers.

The 25-year-old failed to set the Premier League alight last season as he managed to score just 4 goals in his 22 appearances during his time at Loftus Road as QPR finished bottom of the table.

However, Vargas has rediscovered his best form for his country and his brace against Peru earlier this week not only makes him the Copa America’s leading scorer on 4 goals, but it also booked Chile’s place in the final where they’ll take on Argentina on Saturday night.

It seems his impressive form this summer has caught the eye of Arsene Wenger as talkSPORT are citing reports coming out of Italy which claim Arsenal are now in talks to try and sign the diminutive attacker.

The news stems from outlet Sport Mediaset, who state that Napoli are keen to cash-in on Vargas and an £11m deal with the Gunners is now on the cards, while the Metro go one further and claim that the player has already held talks with Wenger and made it clear he wants to move to North London.

It’s difficult to know how much truth there is behind these reports as there is so much speculation around these days but Vargas’s agent, Cristian Ogalde, has admitted the forward doesn’t know where he’ll be playing next season.

“Every year, at this time, everyone asks about Vargas,” Ogalde is quoted as saying by talkSPORT

“Vargas is a Napoli player and he wants to play. He wants to be happy and to be given the space that his level of performance deserves.

“That said, it’s too early to say where he’ll play next season. Everything depends on the conversation we’ll have with Napoli.”

Vargas showed flashes of his potential at QPR last year but on the whole he’s struggled to make a real impact at any European club he’s played for so it would be something of a risk if Wenger does end up bringing him to North London.

However, he certainly has the potential and there’s not many better managers capable of getting the best out of their players than Arsene, so it could be a shrewd piece of business if we can get him at the right price.

Vargas has played on the right wing for much of his club career but is capable of playing anywhere across the front three, including up front where he shines alongside Alexis Sanchez for Chile, so he’d give us plenty of options in attack.

It would also be nice for Alexis to have his compatriot around the club and the two seem to have a good understanding with their country, but with that said, I’d still be majorly surprised if we see Vargas end up signing for Arsenal this summer.