Manchester United have received a major transfer blow as key target Morgan Schneiderlin favours a move to Arsenal in order to work under Arsene Wenger.

With the summer transfer window finally open for business, managers are working hard trying to strengthen their squads ahead of next season so we’ll bring you all the news and gossip. Today, more on the future of Morgan Schneiderlin….

Manchester United have received a major transfer blow as key target Morgan Schneiderlin favours a move to Arsenal in order to work under Arsene Wenger, according to The Sunday Times.

Schneiderlin has just come off the back of another impressive season at Southampton with his excellent displays in the middle of the park helping Ronald Koeman’s side secure Europa League qualification with a seventh-placed finish in the Premier League.

But that doesn’t look like it will be enough to keep the French international at St Mary’s as the midfielder was quoted in the Daily Mail last month as saying he’s decided to leave this summer and wants to join an English club who play in the Champions League.

This revelation soon led to speculation of a move to several of the Premier League ‘big boys’ and Arsenal quickly emerged as the early front-runners with the Independent reporting towards the end of June that bookmakers were forced to cut odds on Schneiderlin moving to the Emirates to just 1/2.

Manchester United then appeared to move themselves into pole position to secure the 25-year-old’s signature with the Mirror claiming last week that United officials had agreed personal terms with Schneiderlin after meeting his agents in Paris.

A fee was yet to be agreed with Southampton though and the Telegraph reported last week that United’s opening £20m offer had been rejected with the Saints holding out for a fee closer to £25m.

However, it appears even if United can agree a fee with the South Coast club they may have to persuade Schneiderlin to opt for a move to Old Trafford as the Sunday Times claim today that the midfielder has informed friends that he still favours a move to Arsenal in order to work under Arsene Wenger.

Here is a screenshot from the Times newspaper where they make the claim midway through the article. 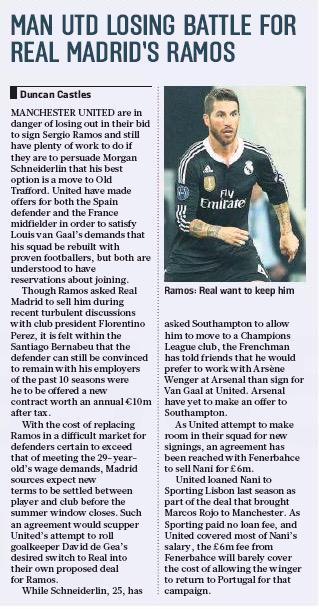 If true, that would come as a major blow to United as Louis van Gaal needs to bring in another holding midfielder to ease the load on Michael Carrick next season and Schneiderlin would have been an excellent addition.

The good news for the Red Devils is that Arsenal are yet to formalise their interest in the form of an official offer so United are still further down the line in terms of getting a deal done, but it appears that if the Gunners do step-up their interest then the midfielder may opt for a move to North London.

Wenger could also do with another option in the defensive midfield role as Mikel Arteta is now out-of-contract while Mathieu Flamini is being tipped to leave the club this summer so Arsenal need competition for Francis Coquelin next year and I think Schneiderlin would fit in perfectly.

The situation is finely poised but I’d be hugely surprised if the player didn’t leave Southampton over the coming weeks, the only big question is where he’ll be heading….