Chelsea will look to start their European campaign with a win when they play Maccabi Tel Aviv tomorrow night. Here is the side I think Jose Mourinho will pick:

Chelsea will look to start their European campaign with a win when they play Maccabi Tel Aviv at Stamford Bridge tomorrow night. Here is the side I think Jose Mourinho will pick:

Goalkeeper: Thibaut Courtois has been ruled out for the foreseeable future through injury so Asmir Begovic will deputise in goal tomorrow night.

Defence: Mourinho has confirmed he’ll make a few changes to his starting eleven after another disappointing display during the 3-1 loss to Everton on Saturday.

I think Gary Cahill will get a recall alongside John Terry with Kurt Zouma dropping out while Cesar Azpilicueta could move across to right back to replace the out-of-sorts Branislav Ivanovic. That would mean summer signing Baba Rahman could make his full debut on the left side of defence.

Midfield: Cesc Fabregas is another who’s been below his best this season but I think we’ll see him retain his place. John Obi Mikel was brought in away at Everton with Fabregas further forward but the Blues don’t need two defensive midfielders at home to Maccabi so I think we’ll see the Nigerian drop back out tomorrow.

Attack: Willian was unfortunate to be left out against the Toffees so I think he might get a recall with Pedro rested. Oscar is also back in contention after being passed fit to return to the squad while Eden Hazard and Diego Costa should keep their places despite their disappointing form of late. 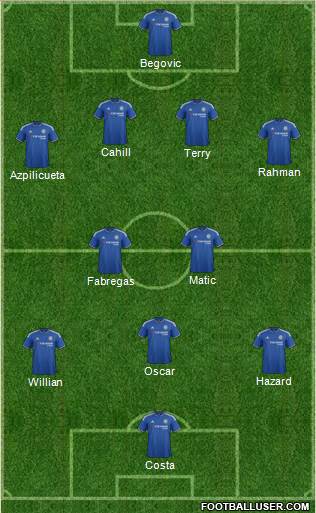