Liverpool will look to get back on track when they take on Aston Villa at Anfield on Saturday afternoon. Here is the side I think Brendan Rodgers will pick:

Liverpool will look to get back on track when they take on Aston Villa at Anfield on Saturday afternoon. Here is the side I think Brendan Rodgers will pick:

Goalkeeper: Adam Bodgan was the hero for the Reds after saving three penalties against Carlisle last night but I think we’ll still see Simon Mignolet recalled to the starting eleven.

Defence: Rodgers is set to make several changes to the side that drew 1-1 with Carlisle and he’ll be forced into at least one change at the back after Dejan Lovren was stretchered off with suspected ankle ligament damage.

Mamadou Sakho will therefore be recalled alongside Martin Skrtel and Emre Can if Rodgers decides to stick with his 3-4-1-2 formation.

Midfield: Alberto Moreno could keep his place on the left wing with Nathaniel Clyne also starting on the right hand side. Lucas Leiva should get a recall to start alongside James Milner in the middle of the park after being rested in the League Cup.

Attack: Christian Benteke is also missing after being forced off at half-time against Norwich last week with a hamstring injury so Danny Ings should start up front after scoring in each of his last two appearances.

Daniel Sturridge should get a recall alongside Ings with Philippe Coutinho coming in to play in the No.10 role. Roberto Firmino is a doubt after picking up a back injury last night. 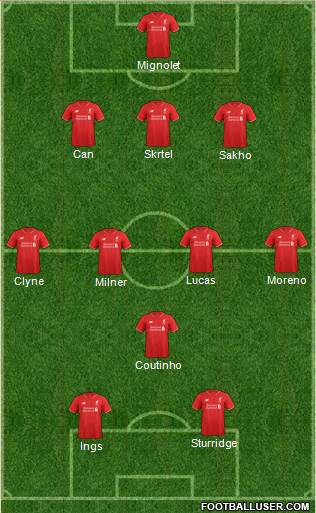