Arsenal will look to get their Champions League campaign back on track against Olympiacos on Tuesday night. Here is the side we think Wenger will select.

Arsenal will look to get their Champions League campaign back on track against Olympiacos on Tuesday night. Here is the side Gooner Mac thinks Arsene Wenger will select for the game:

Goalkeeper: David Ospina played at Dinamo Zagreb two weeks ago but I think we’ll see Petr Cech start this time around as we can’t afford any more slips after losing in Croatia.

Defence: Arsene is expected to field a strong side and he’s hinted those who’ve played against both Tottenham and Leicester are the only one’s likely to get a breather. One such player is Per Mertesacker so he could drop out with Gabriel coming in to start alongside Laurent Koscielny after serving his one-game domestic suspension.

I think the boss will resist the temptation to make any further changes at the back meaning Hector Bellerin and Nacho Monreal should keep their places.

Midfield: Francis Coquelin is expected to be back in contention after returning to full training on Sunday having missed the last two games with a knee injury.

His return is a timely one as both Mathieu Flamini and Mikel Arteta have been ruled out with minor muscle injuries meaning we have limited options in the holding role. Coquelin should therefore be restored to the team alongside Santi Cazorla in the middle of the park.

Attack: Aaron Ramsey is another player who played in both our last two matches so the Welshman could get a rest ahead of Sunday’s huge Premier League clash with Manchester United.

Alex Oxlade-Chamberlain could be the man to come in on the right-wing and join Mesut Ozil and Alexis Sanchez in the attack. Olivier Giroud is suspended after being sent off against Zagreb so Theo Walcott should continue to lead the line up front. 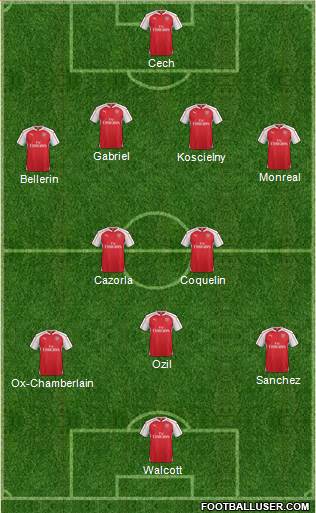