With the summer transfer window now closed for business, it’s time to start looking at those deals that failed to get over the line and those which are being lined-up for the future. Today, Thomas Muller hints at Man Utd move… 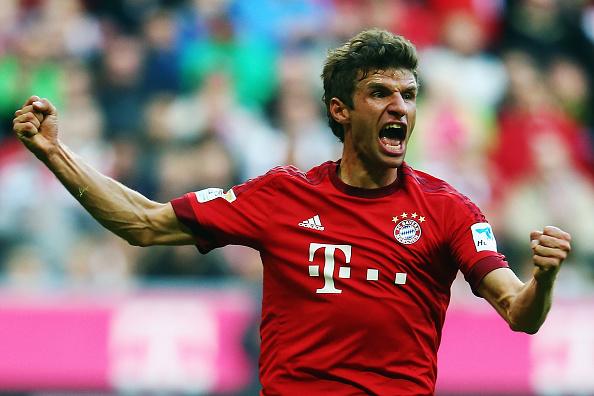 Thomas Muller has dropped a huge hint that he could join Manchester United after admitting that the money being offered by top Premier League clubs is extremely tempting, according to the Mirror.

Louis van Gaal was a busy man during the summer transfer window after bringing in six new signings but United were widely believed to have made several attempts to try and land Bayern Munich ace Muller as well.

The Bundesliga giants rebuffed a number of offers from United with the Daily Mail reporting back in August that the Red Devils had submitted a final £60m bid for the German international.

Bayern chief executive, Karl-Heinz Rummenigge, insists Muller won’t be allowed to leave for any price and has pointed out that they are under no pressure to cash-in as the player still has four years left on his contract.

“It’s difficult. Everyone knows our old friend, Louis van Gaal. He is very stubborn in those things.

“Maybe he thinks that there is a price where Bayern will start to ruminate, but there is no price at all.

“Because of our partners and our really good financial situation we are completely resistant.

“There is no price, Thomas Muller has four years more on his contract.

“There is no one, not here or anywhere, who can explain to me why we should sell Thomas Muller.” Rummenigge is quoted as saying by the Mirror.

However, it appears the player may be open to the idea of coming to England as he’s now admitted the wages being offered in the Premier League are tempting.

“In the end, we should not forget that playing football is our job,”

“So people should accept that wages will always play a role in a player’s decision-making. Of course, the wages that are being paid in the Premier League are very tempting. It would be hypocrisy to deny that.

“You have to look at the complete package to determine whether something is right for you. What’s good for you one day will not necessarily still be good for you the day after.

“I know that a lot of German clubs are unhappy with the Premier League clubs’ spending, but I think it is something good for all clubs in the end. It can only be a good thing for football when clubs invest so much money.”

So it looks like Muller is softening to the thought of joining a club like United as they are able to offer financial packages that Bayern just aren’t able to match.

Obviously Muller would be a sensational signing for United as the 25-year-old is a world class talent who’s capable of playing anywhere across the front three.

Despite not always being played as a striker, Muller has still managed to score 131 goals in 315 games for Bayern and it’s that kind of goal threat United have been crying out for in recent years.

However, Bayern are determined to keep hold of the German international so unless the attacker is willing to force his way out of the Allianz Arena – which I think is unlikely – United may continue to be frustrated in their pursuit.