Arsenal will look to continue their excellent recent run when they take on Sheffield Wednesday in the fourth round of the Capital One Cup tonight.

We travel to Hillsborough off the back of a 2-1 victory over Everton on Saturday that extended our unbeaten run to eight games in all competitions and saw us go level on points with Premier League leaders Manchester City.

We’ve put in some impressive displays in recent weeks to beat the likes of Manchester United, Watford and Bayern Munich so the boys should be in confident mood heading into the game tonight.

However, Hillsborough has proven to be a difficult ground for us over the years as we’ve failed to record a victory in any of our previous six visits and Arsene Wenger has never won at the ground during his 19-year career at Arsenal.

We should have a good chance to put that record right this evening but nothing should be taken for granted so a professional performance is needed if we want to book our place in the next round.

Wenger is set to make wholesale changes to his starting eleven but Petr Cech will keep his place as back-up keeper David Ospina remains out with a shoulder injury.

Per Mertesacker is expected to come back in to the side after recovering from illness while Arsene has suggested that Joel Campbell and Calum Chambers will also start the game.

Mikel Arteta remains out with an ankle injury so he joins Aaron Ramsey, Jack Wilshere, Danny Welbeck and Tomas Rosicky on the sidelines.

The likes of Laurent Koscielny, Francis Coquelin, Mesut Ozil and Alexis Sanchez are all set to be rested but Santi Cazorla may start as Wenger has limited options in midfield unless he wants to play one of the youngsters.

Mathieu Debuchy, Kieran Gibbs and Mathieu Flamini are set to come in to the team while young forward Alex Iwobi could also get a rare start in attack.

As for Wednesday, they will be without Keiren Westwood, Michael Turner, Alex Lopez, Marco Matias and Modou Sougou while  Sam Hutchinson and Glenn Loovens are carrying knocks.

Forward Fernando Forestieri is cup-tied but Lucas Joao is fit to play after recovering from a facial injury. 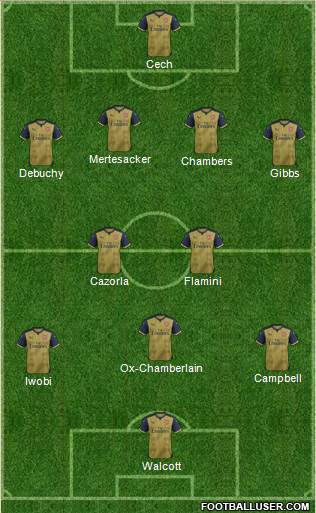 Sheffield Wednesday 1-2 Arsenal: League Cup ties are always difficult to predict as we never really know what kind of team will be put out, but even with a severely depleted team I think we should have too much quality for the Championship outfit.

Arsenal are the 4/9 favourites to win with the bookmakers but Football-Talk can get you crazy odds of 4/1 on an away win tonight if you click here. My prediction of 2-1 is on offer at odds of 15/2 while I also like the look of Theo Walcott opening the score at 7/2. If we combine those two bets in a score-cast, then we get very tempting odds of 18/1.