Jurgen Klopp will look to pick up his first win as Liverpool when the Reds take on Bournemouth on Wednesday. Here is the side I think the German will pick:

Jurgen Klopp will look to pick up his first win as Liverpool boss when the Reds take on Bournemouth in the fourth round of the Capital One Cup at Anfield on Wednesday night. Here is the side I think the German will pick:

Defence: Klopp has hinted that he’s ready to make changes to his side in order to keep their legs fresh and that could see him make a couple of changes to his defence.

Dejan Lovren is almost certain to come in and he could be partnered by Martin Skrtel if Klopp wants to keep some experience in his back four. Nathaniel Clyne has played a lot of football this season so he could do with a rest which may see young Connor Randall given a taste of first team action.

Midfield: Joe Allen is expected to start in the middle of the park and he could be joined by Cameron Brannagan after Klopp saved special praise for the youngster at his press conference earlier. That would allow both Emre Can and Lucas Leiva to be given a breather.

Attack: James Milner is suspended so we could see Jordon Ibe start on the right with Roberto Firmino expected to make his first start since recovering from a back injury.

Adam Lallana may keep his place in attack but Divock Origi is set to drop out with the fit again Christian Benteke likely to start having made a goal-scoring return off the bench against Southampton on Sunday.

Daniel Sturridge is still out with a knee injury so he joins Danny Ings on the sidelines. 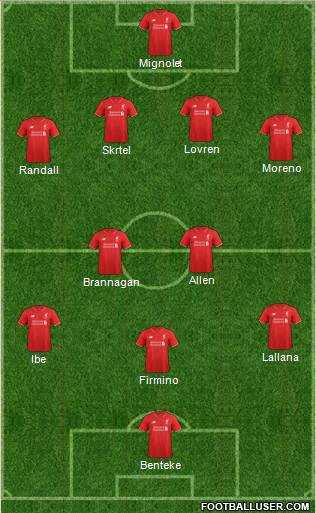