Man Utd will look to get back to winning ways when they take on Crystal Palace on Saturday afternoon. Here is the side I think Louis van Gaal will pick:

Man Utd will look to get back to winning ways when they take on Crystal Palace at Selhurst Park on Saturday afternoon.  Here is the side I think Louis van Gaal will pick:

Goalkeeper: David de Gea was rested in midweek so the Spaniard will come back in to the starting eleven with Sergio Romero dropping out.

Defence: van Gaal is only likely to make one change to his back four with Phil Jones coming back in for Daley Blind. Chris Smalling will obviously keep his place while Matteo Darmian should continue at right-back with Antonio Valencia struggling with a knock.

Marcos Rojo will keep his place at left-back with Luke Shaw out for the season with a broken leg.

Midfield: Michael Carrick and Marouane Fellaini started the League Cup tie against Middlesbrough but are set to make way with Bastian Schweinsteiger and Morgan Schneiderlin getting recalls in midfield.

Ander Herrera was also rested on Wednesday night so the Spaniard should come back in to the side in place of impressive youngster Andreas Pereira.

Attack: Wayne Rooney missed his spot kick during the shoot out defeat to ‘Boro and he had a poor game all-round after coming off the bench but I expect van Gaal to stick with his skipper this weekend.

Anthony Martial and Juan Mata should get their recalls to the first team with Memphis Depay and Jesse Lingard dropping out. 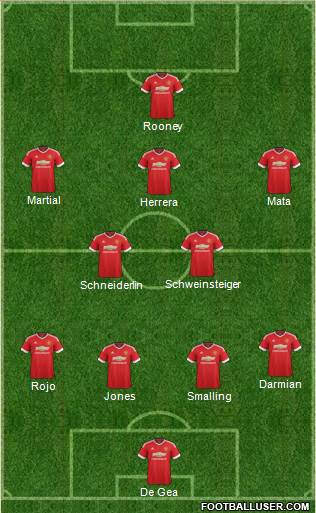