Manchester United will look to get back to winning ways when they entertain CSKA Moscow at Old Trafford in the Champions League tomorrow night.

United have failed to win any of their previous four games with the last three matches in all competitions ending 0-0 so Louis van Gaal must find a way to get his team scoring again.

Anthony Martial’s equaliser in Moscow two weeks ago was United’s last goal and the 1-1 draw in the reverse fixture has left the Red Devils sitting level on 4 points with tonight’s opposition in Group B.

Therefore, victory would put United in a strong position to secure qualification to the knockout stages but in a group that sees all four team separated by just three points, van Gaal will know his side can not afford any slip up tonight.

United midfielder Morgan Schneiderlin is a doubt for the game after being granted permission to miss training yesterday due to personal reasons.

Antonio Valencia is still out with an ankle injury while Memphis Depay and James Wilson are also expected to miss the game with minor knocks.

However, Phil Jones is back in contention after missing the Crystal Palace draw on Saturday so he could resume his partnership alongside Chris Smalling.

There has been plenty of speculation that Wayne Rooney may be rested or dropped tonight but I think van Gaal will stick with the striker for this vital Champions League clash. 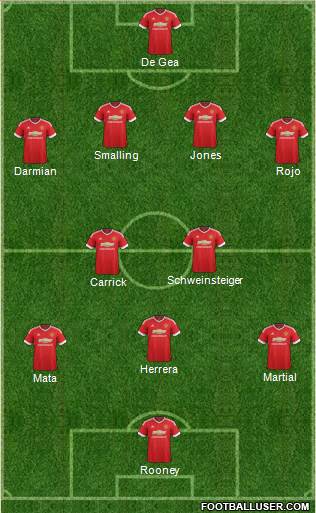 Man Utd 1-0 CSKA Moscow: United have been toothless in front of goal lately so I really don’t see many goals in this one. CSKA can be a dangerous side but I expect United to keep them at bay and edge it 1-0 to take a big step towards qualification.

United are the 11/20 favourites to win the game but Football-Talk can get you enhanced odds of 4/1 on a home victory – just click here to take advantage. My predicted score of 1-0 is on offer at odds of 6/1 while I also like the look of Anthony Martial getting the only goal of the game at 9/2. If we combine those two bets in a score-cast, then we get very tempting odds of 18/1.