Chelsea will look get their season back on track when they take on Dynamo Kiev in the Champions League at Stamford Bridge tonight.

The Blues have endured a nightmare start to their Premier League title defence with Saturday’s 3-1 home loss to Liverpool their sixth defeat in 11 games to leave them languishing down in 15th place in the table.

The West Londoners form in the Champions League has also been inconsistent this season with Jose Mourinho’s men taking four points from their opening three games to leave them third in Group G.

Mourinho has described this as a ‘must not lose game’ but you’d expect a team like Chelsea to be looking to secure victory on home soil as a win would move them above the Russian’s in the table and in to a great position to secure qualification to the knockout stages.

The hosts will have to make do without the services of striker Radamel Falcao after he picked up an injury in training on Thursday. The Colombian international is expected to be on the sidelines for a number of weeks.

Branislav Ivanovic returned to training yesterday but after a month out with a hamstring injury I think he could still be short of match fitness to be involved tonight.

Pedro was also back in training after missing the last three games with a knock but Thibaut Courtois remains out after knee surgery.

Mourinho could make changes to his defence after shipping three goals to Liverpool. This could see Baba Rahman come in with Kurt Zouma moving in to the middle of defence alongside John Terry.

Nemanja Matic and Cesc Fabregas should return to the starting eleven after being left out at the weekend. 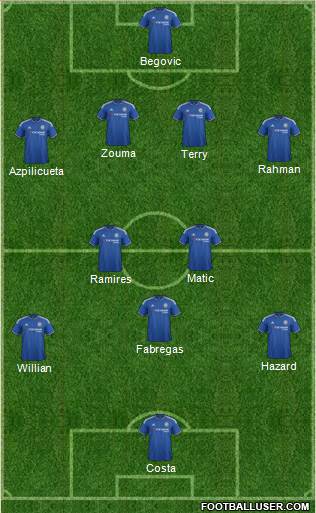 Chelsea 2-0 Dynamo Kiev: The Blues are certainly nowhere near the level you’d expect them to be this season but Kiev are a limited side and I think Chelsea will ease to victory at the Bridge tonight.

Chelsea are the 8/11 favourites but Football-Talk can get you enhanced odds of 4/1 on a Blues win if you click here. My prediction of 2-0 is on offer at odds of 13/2 and I also like the look of Costa opening the score at 15/4. If we combine those two bets in a score-cast, then we get very tempting odds of 16/1.