Smalling has been one of United’s best performers so far this season and he was once again excellent at the back as Louis van Gaal’s men eased to a 2-0 victory over West Bromwich Albion on Saturday afternoon.

It was United’s fifth consecutive clean sheet and Smalling has been a key factor in the Red Devils ever-improving defence with his latest display earning him a place in the Team of the Week.

The England international was joined at the back by Liverpool full-back Alberto Moreno after his impressive outing during the Merseysiders 2-1 defeat to Crystal Palace on Sunday afternoon.

Moreno was named in the line-up along with team-mate Philippe Coutinho after the Brazilian earned a score of 8.50 – which was the third highest individual score of the entire weekend.

That honour went to Newcastle keeper Rob Elliot after he produced a string of fine saves to help secure a 1-0 win at Bournemouth while Manchester City’s Bacary Sagna also made the cut after helping the league leaders to a 0-0 draw at Aston Villa.

However, there must have been a shortage of star performances up front as WhoScored have strangely named Tottenham’s Moussa Dembele as a central striker after the Belgian midfielder helped Spurs to a 1-1 draw at Arsenal yesterday. 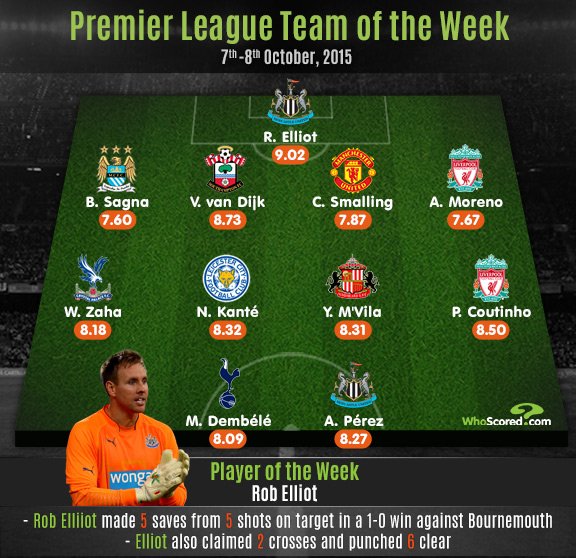