Liverpool will look to end their Europa League group stage campaign on a high when they take on FC Sion in Switzerland this evening.

The Reds have already qualified for the last 32 following a 2-1 victory over Bordeaux last month and they head into tonight’s game sitting top of Group B.

However, with Sion just a single point behind, Jurgen Klopp will be hoping to maintain their unbeaten record tonight in order to secure top spot and a favourable draw in the knockout stages.

The Merseysiders will be looking to bounce back after suffering a 2-0 defeat at Newcastle United on Sunday afternoon but that won’t be an easy task as the hosts still need a point in order to guarantee qualification to the next phase so Liverpool shouldn’t be expecting an easy ride tonight.

The Reds have been boosted by the return to fitness of Philippe Coutinho after he recovered from a hamstring injury that’s kept him out of the last four games but Klopp isn’t expected to risk the Brazilian playmaker from the start.

Alberto Moreno, Joe Allen and Lucas Leiva have all been left back in the UK to rest ahead of Sunday’s clash with West Brom while Jordon Ibe misses out due to illness.

Daniel Sturridge has been ruled out with a hamstring injury that he suffered at St James’ Park on Sunday so Klopp may look to protect Christian Benteke meaning Divock Origi could lead the line up front.

Jordan Henderson could make his first start in over three months while youngsters Jordan Rossiter, Brad Smith and Connor Randall have all made the trip to Switzerland and are in the squad. 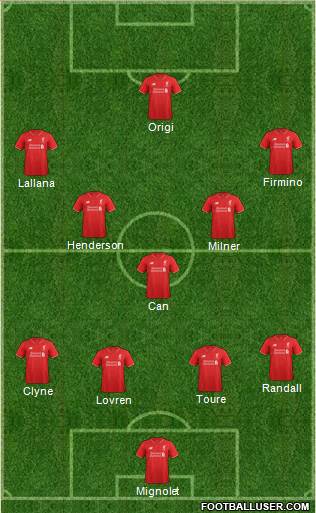 Sion 1-2 Liverpool: The Reds were poor against Newcastle on Sunday so I’d expect Klopp to get a response out of his players tonight. Sion are a dangerous side but even with some players missing/rested, I think Liverpool will edge this one to secure top spot.

Liverpool are the 13/10 favourites with the bookmakers but Football-Talk can get you enhanced odds of 6/1 on a Reds win if you click here. My prediction of 2-1 is on offer at odds of 17/2 and I also like the look of Firmino opening the score at 13/2. If we combine those two bets in a score-cast, then we get very tempting odds of 33/1.