Chelsea and Manchester slayers have joined two Arsenal players in the WhoScored Premier League Team of the Week. Check out the eleven here…

The Gunners moved temporarily top fop of the Premier League table with a comfortable 2-0 victory over Aston Villa at Villa Park on Sunday afternoon.

Aaron Ramsey secured the three points after finishing off a flowing counter-attack just before half-time which followed Olivier Giroud’s opener from the penalty spot.

The Welshman was in excellent form and his overall score of 8.15 was enough to see him join team mate Koscileny in the Team of the Week after the defender’s solid display at the back saw him register a score of 7.93.

Arsenal were then knocked off top spot by Leicester City as Riyah Mahrez inspired the Foxes to a 2-1 win over Chelsea and his score of 8.94 once again sees him make the cut alongside team mates Christian Fuchs and Marc Albrighton.

There is also a place for Joshua King up front as the striker struck shortly after half-time to sink Manchester United 2-1 at Dean Court on Saturday night while Jack Butland is named in goal after a superb display for Stoke earned him a score of 9.28.

Check out the full Team of the Week below: 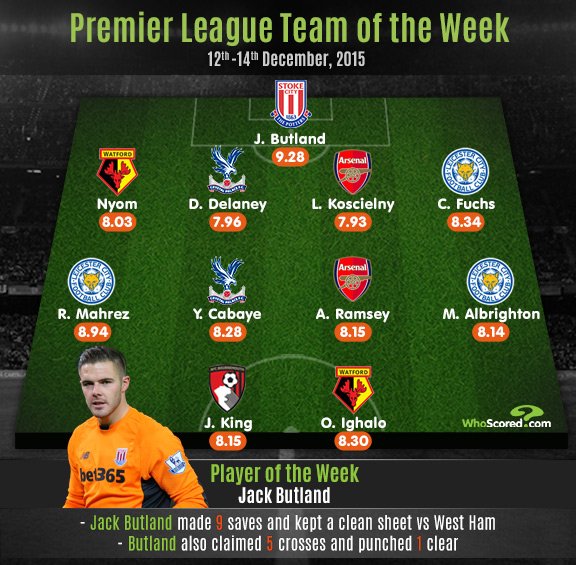