Chelsea will look to book their place in the fourth round of the FA Cup when they entertain Scunthorpe United at Stamford Bridge on Sunday afternoon.

The Blues have endured a disappointing Premier League campaign so far with the defending champions languishing way down in fourteenth place in the table after losing nine of their 20 games so far – although they did get back to winning ways with an impressive 3-0 win at Crystal Palace last week.

Interim boss Guss Hiddink has a huge task ahead if he’s to secure Champions League qualification as Chelsea are 13 points adrift of fourth-placed Tottenham Hotspur so the Dutchman may look to the FA Cup as a way to salvage something from the season.

However, Hiddink is expected to make some changes to his starting eleven and hand some key men a well-earned rest tomorrow. Thibaut Courtois is expected to be left out with Asmir Begovic coming in while Baba Rahman should start at left-back.

Gary Cahill is now fit so should replace Kurt Zouma at the back while Nemanja Matic and Ruben Loftus-Cheek could start in the middle of the park with Cesc Fabregas and John Obi-Mikel rested.

Eden Hazard has been ruled out after picking up a groin injury during last week’s win over Crystal Palace so Pedro could come in to the attack while Diego Costa is likely to lead the line up front as Loic Remy and Radamel Falcao are both injured. 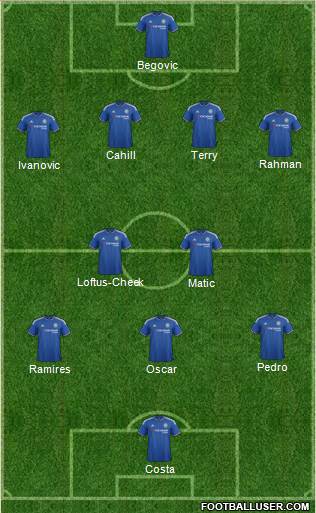 Chelsea 3-0 Scunthorpe: The Blues were back to their best at Palace last weekend so Hiddink will be looking for his players to replicate that performance on home soil. Despite making a number of changes, Chelsea are still able to field a strong eleven and I think they’ll be far too good for the League One side.

Chelsea are the heavy 1/5 favourites to win the game but Football-Talk can get you enhanced odds of 3/1 on a Chelsea win – just click here to take advantage. My prediction of 3-0 is on offer at 13/2 and I also like the look of Pedro opening the scoring at odds of 9/2. If you combined those two bets in a score-cast then we get very tempting odds of 20/1.