Arsenal take on Liverpool at Anfield on Wednesday night. Here is the side Gooner Mac thinks Arsene Wenger will select for the game:

Arsenal will look to cement their place at the top of the table when they take on Liverpool at Anfield on Wednesday night. Here is the side Gooner Mac thinks Arsene Wenger will select for the game:

Goalkeeper: David Ospina faces a late fitness test after missing the FA Cup win over Sunderland with a minor groin injury but either way Petr Cech will start in goal.

Defence: The boss is expected to make a couple of changes to his back four with Per Mertesacker set for a recall after being rested last time out. Gabriel is the man most likely to make way so Mertesacker will resume his partnership alongside Laurent Koscielny.

Hector Bellerin will certainly keep his place at right-back after another fine performance against Sunderland but Nacho Monreal should come back in at left-back with Kieran Gibbs dropping out.

Midfield: Calum Chambers put in a solid showing in midfield against Sunderland but I think we’ll see Mathieu Flamini recalled in midfield while Aaron Ramsey will also come back in to the starting eleven. Alex Oxlade-Chamberlain is probably the player most likely to make way.

Mikel Arteta has been passed fit for selection but I don’t think he’ll be ready to start in such an intense game just yet while Francis Coquelin, Jack Wilshere and Santi Cazorla all remain injured.

Attack: Mesut Ozil will come back in to the side after being rested for the FA Cup game but Joel Campbell should keep his place along with Theo Walcott in attack after another fine display at the weekend. Olivier Giroud will continue to lead the line up front. 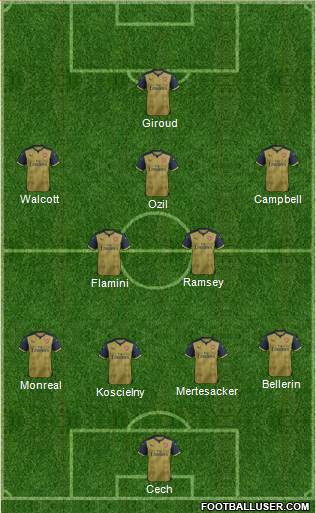